Latin American News – Although Chavez has been thought to be possibly  finally getting out of office in Venezuela, he is now saying that he will honor the Venezuela election results and votes.  If Henrique Caprilescan pull out the win and actually takes office then I believe that his reign is finally over. 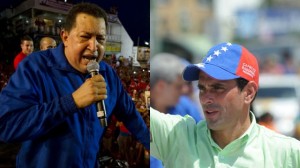 Venezuelans cast their ballots today in Caracas for presidency. Venezuelan President Hugo Chavez  accompanied by well-known figures said  that he will “recognize the results” in this election. Chavez has said he has beaten cancer and but will he beat Henrique Capriles.

“Recognize whatever results (…) Although one vote or are three million votes, responsible political actors have to recognize the results, and with absolutely transparent electoral system,” Chavez said after casting his vote .

The head of state exercised his right to vote and was accompanied by Latin American leftist figures such as former Senator Piedad Cordoba, the Nobel Peace Prize and indigenous leader Rigoberta Menchú and the Nicaraguan Miguel D’Escoto, president of the UN General Assembly.

“There are many people in line, good sun, good weather, thank God. There is a massive influx and that is very positive, a mature and maturing democracy,” Chavez welcomed, before responding to questions of national and international journalists .

Chavez, 58 has been in power since 1999 and is seeking his third term.

Your Right to Resell your Own Items Might Be Ruled Illegal