Challenges on a Turtle Trip to Tortuguero CR

Costa Rica Travel News – Watching the Leatherback Sea Turtles arrive on land during their once a year trek to lay their eggs was an experience that I have always been interested in. Some people have this as a bucket list item, and if it is something that you want to experience, Tortuguero is the best place to go. 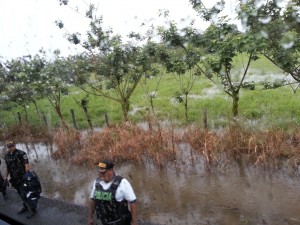 We arranged for a tour because you cannot easily book your own vacation to this Caribbean town. You must arrange with a tour group which I believe is a matter of safety in this area. A small van will pick you up at a specific destination, such as your hotel.

Next, our particular tour met in front of the Holiday Inn in San Jose so that we could get a larger tour bus. The tour buses are usually very comfortable and plush for the hour and a half journey to the boat location.

However, this was rainy season. That comes with a whole new challenge when traveling long distances throughout Costa Rica. The roads were mostly paved. I say mostly because over the years the rain creates potholes and nature slowly eats away at the road which isn’t repaired often, if at all. After passing through farmlands and rain soaked fields, we came to a halt. Another tour bus had slid off the road into a newly made pond. After the police, a tow truck, and people from the bus company arrived, they slowly got the bus back on the road. Our stop was only about 20 minutes, so the situation was remedied quicker than expected.  We made our way to the boat ‘dock’. There is no dock. There is a muddy hill to slide down and jump onto the boat. If you are looking for luxury, then this is not the trip for you.

The boat ride was fun, but, again, this is rainy season in Costa Rica. The river was running so high as to be flooding houses that we passed by. After being gently sprinkled on by some rain, all of a sudden, it became a torrential sheet of rain. Quickly, we all had to jump up and pull down the plastic window sheets to preserve ourselves from having a shower. Fifteen minutes later, the rain eased up, and we were once again, free to view the outdoors without the scratched up window coverings. After an hour we arrived at our destination.

We stayed at the Tortuguero Lodge. It was an all-inclusive place and provided great meals with views of the 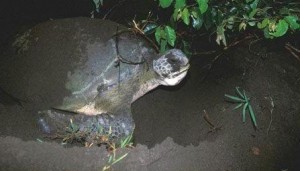 river. When we first arrived, we had to make reservations with our tour guide to view the turtles that evening. We were able to make the earlier tour from 8-10. Once again, we slipped onto the boat to make our way to the turtle destination. A lightning storm had started with rain drizzling onto our umbrellas and raincoats as we disembarked the boat. Our group consisted of only 8 people; the perfect size. Of course, there were other groups from other tour companies, but the people in charge did a nice job of spacing out the groups and not overwhelming the turtles.

The first turtle we saw stunned me! I didn’t realize how huge they are. This turtle was being measured by the conservancy group that works on the beaches to help keep the turtles safe. This turtle was around 3 feet long and was covering up the eggs with her back feet. We were hit a couple times by turtle dirt spray. You can’t say that everyone has had that experience. Our group left that turtle to see another one actually laying eggs.

The tour guide used a red light so as not to disturb the turtles but gave enough light so we could actually see a turtle laying eggs from her body. It truly was a National Geographic moment! The lightning and rain were continuing, so every so often the entire beach would light up from the lightning. You could see everything clearly including a mile or so down the beach.

Originally, we thought a vehicle had been used by the conservation group because there appeared to be tire tread marks in the sand, however, after watching a turtle move herself back to the ocean after her duty was completed, we realized those markings were the turtles front and back fins dragging itself to and fro the shore. These animals are amazing and this truly was a once in a lifetime event, because after the ordeal we went through; it was for sure worth it, but I won’t be doing it again.