Cellphone Use During Flights?

World Travel News – You might not be able to escape a co-passenger that won’t shut up now that the government is considering allowing passenger to make cellphone calls while flying. 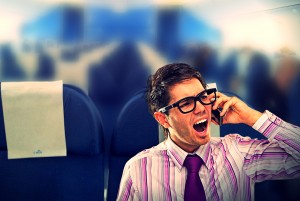 Mere weeks after the FAA relaxed rules to allow the use of personal electronic devices during all phases of flight — a running list of which airlines are allowing gate-to-gate use is here — the FCC is getting in on the cellphone plane party and considering letting passengers talk and text across the whole country.

“…the time is right to review our outdated and restrictive rules,” said FCC Chairman Tom Wheeler.

The public reaction was swift and overwhelmingly negative. Some passengers said they would consider changing their airline loyalty if their go-to carrier decided to allow in-flight calls.

“100 percent. I’m a frequent flier on one particular airline but if they made that change I would consider making that change for sure,” a passenger at Washington-Dulles told TODAY.

When the TODAY show asked, “Should the FCC allow cellphone calls on planes?” 96 percent of responding viewers using the hashtag #orangeroom said “NO.” 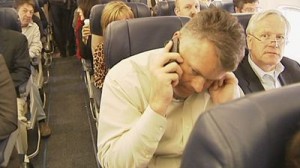 “Flight Attendants, as first responders and the last line of defense in our nation’s aviation system, understand the importance of maintaining a calm cabin environment,” said the Association of Flight attendants in a statement. “Passengers making phone calls could extend beyond a mere nuisance, creating negative effects on aviation safety and security that are great and far too risky. ”

However, some fliers said that cellphone use on planes wouldn’t be all that bad, as long as folks were polite about it.

“I think that if other passengers were respectful and they used earphones or other wireless devices then I think it would be acceptable,” said one passenger at Dulles airport.

The FCC will solicit public comments on the issue in December, followed several months later by a final vote. Ultimately it will be up to individual carriers to decide whether to allow the calls on their flights. United, American and Jetblue are mulling the issue, while Delta has said passenger feedback has already led them to decide against in-flight cellphone use.

Only in Costa Rica for Week of November 25th

March of the Prostitutes in Costa Rica Part 2