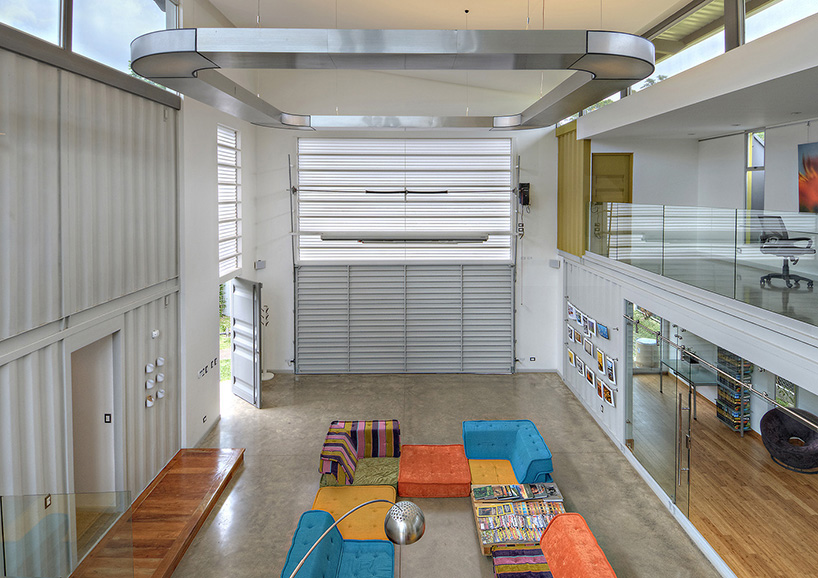 This modern home is sustainable from the ground up, right down to being build around an existing cedar tree growing on the building site, which the builders were loathe to cut down. The home was designed by architect Maria José Trejos.

Casa Incubo is a sprawling 2-story building and it was constructed from eight 40’ high cube containers.

According to the designer, using shipping containers as the main building blocks allowed them to minimize costs and shorten the total construction time by 20%.

The owner is a photographer and wishes to use his home as an office and studio too, so the entire structure was designed with this in mind.

The home consists of a spacious, well-lit, central area, which is formed by the shipping containers and measures a generous 95 square meters.

This space can serve as the living room, or a photographer’s studio. The shipping containers were left in pretty much their original state, and stacked one on top of another to form the home’s bedrooms, kitchen and bathrooms.

The central living space also allows for great cross ventilation, while the entire west facing side is covered in windows, letting in plenty of natural daylight and contributing much to energy savings.

The second floor houses the bedrooms and the photographer’s studio, while one of the containers was also placed so as to create a terrace and a porch below. An outdoor pathway leads to the stairs and the rooftop garden located on the third floor, which also doubles as a sun deck.