A long car chase with a Dodge Caliber in Phoenix, Ariz., ended with the suspect shooting himself in the head on live TV, appearing to commit suicide. The driver, recorded live news helicopters, led law enforcement on a dangerous chase, traveling at speeds of nearly 100 mph. 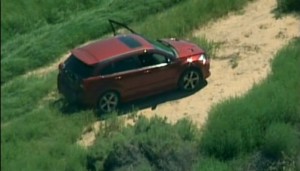 Around 3:30 p.m. ET, at the end of the hour-long pursuit, he drove off the road, got out of his car and ran down a dirt path for a short period. He then appeared to shoot himself in the head and collapsed.

Fox News quickly cut away from the shot and went to commercial after the gruesome incident. Host Shepard Smith immediately apologized for airing what looked like a suicide.

“We really messed up,” Smith told viewers after the flop. He said the footage was on a 5-second time delay and shouldn’t have been aired. “We’re all very sorry. That didn’t belong on television.”
The suspect reportedly stole the car and fired shots at officers before the chase,according to a Fox News affiliate. The man was declared dead at the scene, according to Sgt. Tommy Thompson, a Phoenix police spokesman.

Warning this Video contains Graphic Violence, Do Not Watch if you are Under 18.

Hot Mornings and Rainy Afternoons in Costa Rica This Weekend