World News – How many of us played player beer pong in college or for that matter a Thursday night in Costa Rica? Canadians are innovative people. They’ve given us IMAX movie technology, instant mashed potatoes, the snow blower, and the hockey mask, invented out of necessity by goalie Jacques Plante. 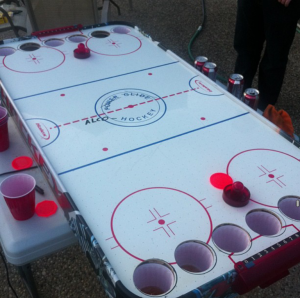 Now those tinkering Canucks are at it again, this time innovating where it really matters – the world of casual drinking sports.

“Alcohockey,” as it’s been dubbed, puts a uniquely Canadian spin on the frattiest sport of all, beer pong.

The idea is simply genius – take an old air hockey table (I assume every basement in Canada has one of these lurking in a cobwebbed corner) and drill six cup-sized holes into each end, right in front of the goal. Drop in some Solo cups, fill them with beer, and let the games begin. Players face off across from one another, and when the puck is “scored” into a cup, the losing goalie must drink its contents.

Unlike competitive “beer” pong in the U.S., in which water is sometimes used (meaning it’s not really BEER pong at all), it appears that these red-bloodied Canadians have filled their cups with honest-to-goodness brews. That sure looks like a quartet of Keystone cans in the picture above, which means these bros have a lot in common with their American cousins when it comes to their beer pong brand-of-choice, except they’ve eschewed the Light stuff for the full-flavored swill – very Canadian!

The idea for Alcohockey was hatched this past summer by Nate Wawrzonek and Edward Ilnicki, two university students from Spruce Grove, Alberta, a town on the western outskirts of Edmonton. While they’re just 18 years old, that’s the legal drinking age in Canada, which makes their game fair game to celebrate.

The uncomplicated brilliance of Alcohockey languished in obscurity until Wawrzonek posted a picture of the set-up on Imgur last week, proclaiming like a proud caveman, “I am inventor of this. I am drunk. I am Canadian.”

He shared the image in hopes of winning a friendly competition with his buddies to see whose submission could get the most “likes” on the site. Wawrzonek’s Alcohockey image found its way to Reddit, and then shot across the Internet faster than a Bernie “Boom Boom” Geoffrion slap shot (yes, I had to look that one up). He won by a landslide.

Some wise pundits have posed several issues with the concept – chief among them that wet pucks won’t glide nicely across an air hockey table. But where there’s a will, there’s a way, and if Wawrzonek and Ilnicki managed to take things this far, a problem like this won’t derail their genius. I’m sure they have paper towels in Canada.

No word yet on if Alcohockey will be making to your local Dave & Buster’s any time soon, but based on previous efforts by the arcade industry to piggyback off the success of beer pong, don’t rule anything out.