World News – Do you ever wonder why more and more people are leaving the USA and setting up their lives elsewhere? Perhaps it is because they actually want to keep the money they make.  There is not one sign that the US government knows how to appropriate the funds they have coming in. 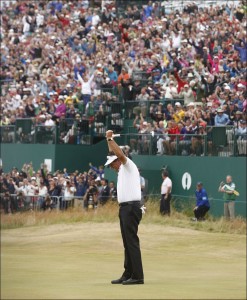 Phil Mickelson‘s come-from-behind win in the 142nd British Open Championship at Muirfield Golf Links in Scotland was decisive. The prize money of £945,000 ($1.43M) is nice, but the big money will be in Mr. Mickelson’s brand extension. See Mickelson’s Brilliant British Open Win Will Pay Off Away From Links. And as long as Mickelson remains a California resident, the state will get a piece of it all.

The oldest among golf’s hallowed events, this marked the 142nd British Open Championship. That is 29 more successive events than the U.S. Open, golf’s next most prevalent tournament. All that history, prestige and global impact should translate into revenue. Even before this win, Mickelson was one of the wealthiest product endorsers in the world.

Sports Illustrated estimated that Mickelson made $36 million last year in endorsements from companies such as KPMG, Barclays, and Callaway. His Open win should extend his marketing and endorsement appeal. This oldest and most international of golf’s championships should make Mickelson even more attractive. Of course, more revenue means more taxes.

Mickelson became a kind of poster-child for selecting residency with an eye on the tax law. That’s curious, considering that Mickelson still calls high-tax-California his home. Mickelson found himself in hot water after he suggested that his taxes were high and that he had to look at alternatives. He even suggested that taxes were one of the reasons he withdrew from buying the San Diego Padres.

“There are going to be some drastic changes for me because I happen to be in that zone that has been targeted both federally and by the state and, you know, it doesn’t work for me right now,” Mickelson said after his T37 finish at the Humana Challenge in Palm Springs. Mickelson’s tax remarks were tame by any standard, but they still provoked an outcry. He apologized, but even that provoked outrage from observers who liked the fact that he mentioned high taxes.

But as a California resident, California gets a piece of it all. If Mickelson’s advisers work on him to move as seems likely, one might expect him to simply move rather than talk about it. Tiger Woods admitted that he moved to Florida in the 1990s, in part due to California’s high taxes. See Tiger Woods admits he left California because of tax rates.

By comparison, the combined state and local top rate in New York is 12.7%. Combined with federal rates and even sales taxes, the mix is causing some even outside the professional sports stratosphere to think critically about where to live. Although Florida and Texas are both attractive no-tax states, there is debate about how large an impact taxes have on moves even by high income taxpayers. See The Myth of the Rich Who Flee From Taxes.

One report claims that jobs, housing costs, family ties and climate are more important. Even wealthy taxpayers generally don’t move for tax reasons, the report claims. See Trends in New Jersey Migration: Housing, Employment, and Taxation. See also Tax Flight Is a Myth. Yet for a professional athlete, especially one not tied to a team, it seems hard to support.

After his British Open win, if he does move, Mickelson Will Not Be Alone In Fleeing Taxes. If he stays, his California tax bill is likely to get even bigger. That could make Florida or Texas too hard to resist.

Only in Costa Rica for Week of July 22nd