Costa Rica News – If you have lived in Costa Rica for a long time, you know that it can be quite difficult to start a business and make it successful.  This daunting task can be seen as an insurmountable venture for someone with a disability, but not for Ericka Hidalgo and her business, Mariposario Sueka. 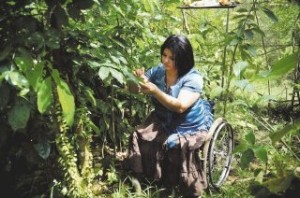 Erika grew up watching the butterflies in her own garden and now through her entrepreneurial business she is able to give the same joy that she received as a young child to people around the world.

Ericka Hidalgo began this project eight years ago in the community of La Suerte de Pococí, in the province of Limón.

She decided that she wanted to become involved in this enterprise and she and her brother began training on the subject, with the clear intention of one day becoming micro-entrepreneurs.

Hidalgo found a location with a mild climate and made sure the plants were optimal for producing some species. With this in place the project was ready to begin.

The greatest stumbling block for both the project and Hidalgo’s life occurred in 2007.  A van was driving recklessly on the road where she and her son were walking.  She was able to push her son out of the way of the on coming vehicle but she was hit and left in a wheelchair.

This incident hurt her both physically and psychologically, but did not kill her spirit and enthusiasm nor her desire to make her dream of the butterfly project a reality.

The desire to achieve economic independence prompted her to create Sueka, her own butterfly farm.

She has exported many butterflies to parks and museums in the United States and Ukraine, countries where there is an established and  profitable market.

The Butterfly Farm Sueka became one of 12 Costa Rican companies that export these insects.

This venue became the school for the exporter, because raising butterflies is learned empirically.

Erika is also in charge of eight employees for a firm that provides services, maintenance and management of houses in Manuel Antonioand  manages a local group of people that design crafts and arts for cruises that arrive in Limón.

An excellent article, Dan! I googled “Mariposario Sueka” and the only result was links to your article and to a similar article written in Spanish published by La Nación, neither of which have any contact information for the business. Do you have any?

I am trying to find that, and messaged a lady on facebook to see if it is her. She is fairly difficult to find by google searches.