Ok to make something out of nothing another Costa Rican company is playing the he isn’t ding it so I am not going to do it card.  Bus routes are going to run and adding 6 or 7 seniors on a route you are going on anyway is not going to make your company go under.  But instead a bus company Nicoyan decided to restrict the amount of free travel for older adults to just one per week. 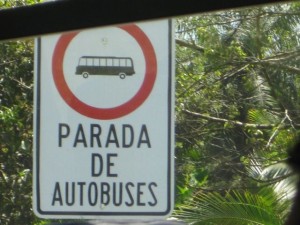 This was acknowledged by Daniel Barrantes, the owner of the autobusera Barrantes, responsible for route 541, which provides service from the city of Nicoya to the neighborhoods.

Barrantes said his company does give the card to older adults to allow them to travel for free, but they abuse and travel more than three times a week. Oh no…..what a crime, lol.

As stated, other companies such as Transport Arza or Campos Brothers, do not cater to seniors “and pick up is up to us.”

The current fee system estimates the demand for older adults in each route and then it is recognized in the cost of the tickets.

Thus, it benefits other users if the elderly are charged for tickets as well.

However, passengers of Nicoya, Hojancha Jicaral Nandayure and complain that drivers refuse to receive the card, such as mode of payment, or abuse them and shame them for not carrying cash.

“I saw the ingratitude they do with these people reject them and tell them the card must pay full fare,” lamented William Villegas, bus user who travels to Hojancha.

For autobusero Barrantes, the problem merits action by the Regulatory Authority for Public Services (Aresep).

“We wanted to go to the Aresep to come to regulate this as it’s not fair that day we have to carry more than 30 old people. So you ordered the drivers who receive their card only once a week per passenger, “he said.

He tried to contact representatives of Arza Transport, Enterprise and Transportation Carrosa Mendez Obando, but was unable to answer.

Only in Costa Rica for Week of June 25th

Seniors here get a free pass. It is something that is subsidized by the government. It is a good thing too. Most of the seniors live on less than $200 a month. Many have to use this bus to and from clinics and hospitals. Limiting them to once a week is ridiculous. Today there is a strike for the workers. This too me is more important that the senior over 65 yrs old can come and go freely. Shameful bus company.