It’s strange how one can sometimes have more in common with people that hold opposite views than one does with people who hold similar views. Such is the case with Buddhism, a ‘godless’ religion with which I have much sympathy, but little simpatico. 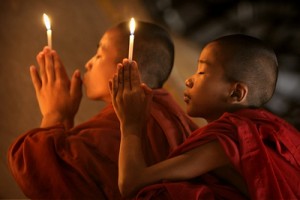 Lest I play into the hands of believers who are willing to kill or be killed for their idea of God, let me be clear on where I stand. The belief in a paternalistic, patriarchal, all-knowing ‘Creator’—in other words, monotheism—is a projection from humankind’s adolescence that has become the biggest stumbling block to spiritual growth in the 21st century. That said, Buddhism simply isn’t filling the vacuum.

It’s no accident that both sides in the supposed ‘war on terror’ hold the same core belief. Despite talk of shared Abrahamic roots, the belief in one God is the most divisive idea that the human mind has ever fabricated.

The God that the terrorists praised as they flew jetliners into the World Trade Towers is the same God that George Bush is still certain supported him in his invasion and occupation of Iraq. Both are the ultimate projection of the divisive human mind, the antithesis of goodness, an expression of evil.

There is no ‘Creator’ in Buddhism, and therefore many refer to it as a philosophy, rather than a religion. With that I feel an affinity, but this marks the point of both my congruence and divergence with Buddhism.

In America, an increasing embrace of Buddhist ideas has not prevented the darkness and deadness of this culture from becoming pervasive. Despite Buddhism’s core mission to awaken people from “the sleep of ignorance,” more and more people are willfully sleepwalking. Indeed, zombies and the walking dead are celebrated in popular culture and the mainstream media. For many, Western Buddhism has added another layer of clever avoidance to the hellish cultural conditions of America and the world. 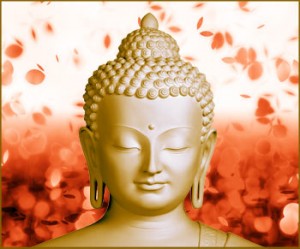 Indeed, it may well be that transplanting Buddhist ideas such as detachment into the thinning soil of America, without maintaining the imperative of right observation and daily spadework, has only added to the erosion of people’s character.

Perverting the practice of Buddhist detachment works well for many in our hyper-individualized culture, by grafting studied indifference onto unexamined roots of egoism, while ‘ supposedly transcending the smaller self.’ American Buddhists often then go on to express egregious things such as, “I see the light and darkness in a larger overview. If the Buddha practiced that kind of detachment, he would not have gotten up from under the bodhi tree.

For example, a reader recently expressed the view, common among American Buddhists, that “there have been many creations and destructions of the universe…the universe has gone through such perils as we are seeing on earth many times.”

Perversely comforting notions like this allow self-absorbed adherents to distance themselves from the unprecedented ecological and spiritual crisis of human consciousness, and remove themselves from the world while believing they are rising above it. Such a ‘perspective’ twists the meaning of Buddhist detachment beyond anything Siddhartha would recognize, and carries detachment to the point of absurdity.

In short, whatever the degree of enlightenment of past Buddhist leaders (and it was often significant), the 5th century BCE religious explosion ignited by Siddhartha Gautama does not apply to our 21st century world. 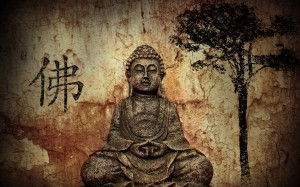 This is even truer in countries where Buddhism has been transplanted, such as the United States. The creative explosion ignited by Siddhartha 2500 years ago was a regional phenomenon. It has all but been extinguished by the lacquering of many traditions of Buddhism since, not to mention the mad rush toward Western materialism in the last few decades. Humanity now requires a global revolution in consciousness.

Many Buddhists make the same argument for why they are Buddhists that followers of Christianity make. They maintain that humans need tradition and ritual because human nature has a tendency to drift or plunge off in any number of deleterious directions, such as aggression and violence, or sorrow and grasping (the primary Buddhist concerns).

The traditionalist says we would be brutes without tradition, but that is a circular, if not specious argument. Has tradition lessened negative characteristics in human nature? In point of fact, tradition has not civilized humankind, but at best has kept the lid on the darkest impulses and tendencies in human nature, a lid that has been blown off in recent years.

The question of tradition and ritual is therefore moot, since they’ve lost whatever meaning, restraining influence and holding power they had. The ancient, unaddressed issues of human nature and consciousness have reemerged with a vengeance in the global society, and the return to the religious traditions of all kinds is leaving people without the strength and persistence to awaken new insight.

Insight and liberation from human consciousness do not require tradition and ritual, and in fact are impeded by them. All that’s required is the daily spadework of negating division and time in passive observation of the movement of thought/emotion, preferably in the mirror of nature. Then awareness grows into a cleansing, renewing and strengthening flame, burning away the dross of experience.