World News – Archaeologists in Nepal say they have found traces of a temple structure linked to Buddha’s nativity going back to the sixth century B.C. 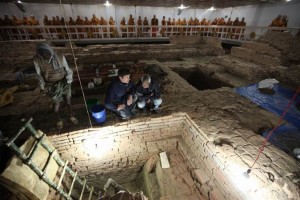 The remnants of a timber structure — unearthed at the Maya Devi Temple in Lumbini, Nepal, which has traditionally been venerated as the spiritual leader’s birthplace — represent the first archaeological material linking the birth of Buddha and the religion he founded to a specific century.

“Very little is known about the life of the Buddha, except through textual sources and oral tradition,” Durham University archaeologist Robin Coningham said in a news release. “We thought, ‘Why not go back to archaeology to try to answer some of the questions about his birth?’ Now, for the first time, we have an archaeological sequence at Lumbini that shows a building there as early as the sixth century B.C.”

The team of researchers, led by Coningham and Kosh Prasad Acharya of the Pashupati Area Development Trust in Nepal, published their findings Monday in the journal Antiquity. The story behind the find will be featured in a National Geographic documentary set to air in February.

Determining Buddha’s Birthdate
Previous evidence of Buddhist structures at Lumbini went only as far back as the third century B.C. Scholars have cited various dates for Buddha’s birth, ranging from the third to the eighth century B.C. In Nepalese tradition, the most widely accepted date is 623 B.C. The freshly found evidence is consistent with that time frame, and that should help experts flesh out the historical background for Buddha, who was born as Siddhartha Gautama.

“The time at which he was born was actually a time of dramatic change,” Coningham told reporters Monday. He noted 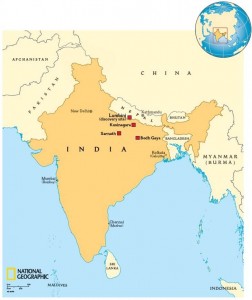 that it was a time marked by urbanization and the rise of a merchant class in the region.

The find is likely to add to Lumbini’s archaeological and religious importance as well. Lumbini is already listed as a UNESCO World Heritage Site, and about a million pilgrims visit the site every year.

“These discoveries are very important to better understand the birthplace of the Buddha,” Ram Kumar Shrestha, Nepal’s minister of culture, tourism and civil aviation, said in a statement issued Monday. “The government of Nepal will spare no effort to preserve this significant site.”

What the scientists found
Lumbini has long been one of Buddhism’s four holiest sites, but the current excavation is the first to plumb its archaeological depths in detail. Starting in 2011, Coningham, Acharya and their colleagues documented the layout of a temple that was built in the third century B.C., during the time of Emperor Ashoka. Beneath that temple, they found the massive bricks of yet another temple that was built during a previous age.

The arrangement of the temples’ foundation stones suggested that there was a central area that was left open to the sky. When the archaeologists excavated that area, they found an arrangement of postholes forming an enclosure — and within that enclosure, they found the remains of tree roots. That meshed with one of the traditional layouts for Buddhist shrines: a living tree that is ringed by wooden railings.

“If the postholes at Lumbini are indicative of a tree shrine, ritual activity could have commenced either during or shortly after the life of the Buddha,” the researchers wrote.

To determine the time frame for the shrine’s construction, they took samples of charcoal and sand from the postholes and surrounding sediment. The charcoal was subjected to carbon-dating tests, while the sand was analyzed using a technique known as optically stimulated luminescence. The measurements all zeroed in on the sixth century B.C. as the likeliest date for construction.

What the Results Imply
In recent years, historians had been leaning toward the view that Buddha was born around 400 B.C. The newly published results argue for a significantly earlier date. But Coningham said the significance of the study goes beyond the calendar.

“For the first time, we actually have scientific evidence leading to the establishment of a major Buddhist shrine,” he said. It’s not beyond the realm of possibility to speculate that the ancient tree at the center of Lumbini’s holy site was the same tree that Buddha’s mother held onto when he was born, as described in Buddhist tradition.

“This is one of those rare occasions when belief, traditions, archaeology and science come together,” Coningham said.

The Universe Is Alive