When I read this I could not stop laughing, and had to share it will out readers. All I can think of is the movie Dumb and Dumber. Two Kansas brothers were lucky — then, not so lucky — and then fortunate again, after they both survived an explosion that destroyed their house. 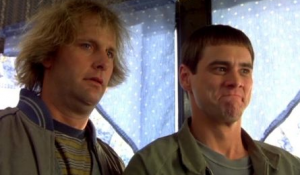 The Wichita Eagle reports that two brothers were partying together to celebrate a $75,000 winning lottery ticket, when they accidentally blew up their Wichita home. Neither of the brother’s names has been reported.

One of the brothers went to the kitchen to refuel the butane torches they planned to use to light their bongs. He emptied a couple of large cans of butane lighter fluid, leaking butane into the air.
“The butane vapor reached the pilot light in the furnace, and as you might expect, ka-boom,” Wichita Police Sgt. Bruce Watts said at a press conference.

The injured brother’s girlfriend drove him to the hospital and then “sped off and has not been found.”

The man was treated for second-degree burns and is in stable condition.

The other brother was arrested on drug charges after telling police he had meth and marijuana in the home.

It is reported that there were also children in the home though there were no reports that they were injured.