Entertainment News- Brad Pitt’s Make It Right Foundation, which has been accused of building sub-standard homes for displaced residents of the Lower 9th Ward of New Orleans, has sued its executive architect over the construction work.

Make It Right planned to build 150 well-designed, energy-efficient homes and sell them at affordable rates to former residents, teachers and first responders as part of an effort to rebuild the area hardest hit by Hurricane Katrina. Famous architects including Frank Gehry, David Adjaye and Shigeru Ban donated avant-garde designs, and Make It Right paid New Orleans architect John C. Williams over $4 million to turn those designs into blueprints and oversee construction, according to the lawsuit, filed Tuesday in Orleans Parish Civil District Court.

The lawsuit accuses Williams of defective work, alleging that his designs exposed wood to rain and moisture, failed to include adequate waterproofing, and featured roofs that weren’t up to code. A number of design flaws made the homes susceptible to water intrusion, according to the lawsuit.

Repairing the damage caused by the allegedly flawed designs could cost the nonprofit $20 million, the lawsuit states.

Williams did not immediately return calls requesting comment on Thursday. In a series of interviews last month with NBC News, he said he was aware of “about a dozen” homes that needed repairs like pitching flat roofs and sealing leaks. He offered to do the work himself in the coming months.

“I helped create it so I’m responsible,” he said then. “That means I’m gonna track them down and make it right.” 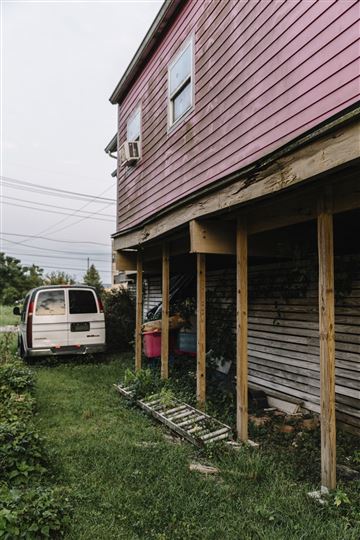 Make It Right began construction on the colorful, modern houses in 2008. While the houses drew national attention and tour groups to the Lower 9th Ward, some home buyers soon began to complain that the houses were plagued with leaking roofs, rotting porches and mold, they said in recent interviews.

Earlier this month, Make It Right was sued by two homeowners for unfair trade practices, breach of contract and fraud. They alleged that Pitt’s charity had sold them “defectively and improperly constructed” homes and then asked them to sign nondisclosure agreements in exchange for repairs.

The new Make It Right lawsuit acknowledges that problems began to appear within a year of the homes’ completion, most related to moisture and leaks. The suit says Make It Right relied on Williams for advice on how to fix the homes.

The lawsuit alleges that Williams knew that the problems were the result of his own designs and “suppressed the truth of the conditions and their causal links.” Williams’ repair work was “ineffective” and required Make It Right to do additional repairs after Williams said he’d done the job, the lawsuit says.

As for Make It Right’s claim that the homes would be environmentally friendly, the lawsuit states that Williams failed to build homes with the promised LEED platinum certification. Williams was aware of this but failed to disclose it to Make It Right, the suit alleges.

In 2016, Make It Right stopped construction on new houses and reported having spent $26.8 million to build 106 homes, including three duplexes.

The attorney representing Make It Right declined to comment, as did a representative for Brad Pitt. Last week, in response to an article detailing allegations from a dozen Make It Right homeowners, Pitt released a statement to NBC News noting that Make It Right had conducted an “extensive review” of homes starting in 2016 and had been coordinating repairs since early 2018.

“I made a promise to the folks of the Lower Ninth to help them rebuild — it is a promise I intend to keep,” Pitt’s statement read.

The latest lawsuit does not fault Williams for a separate problem: dozens of rotting wood decks on Make It Right homes. In 2015, Make It Right sued a lumber manufacturer, TimberSIL, for $500,000, alleging that its chemical-free wood, used to build at least 39 decks, rotted in the Louisiana climate and had to be replaced. That case settled in November 2017 for an undisclosed amount, according to court records.

One Lower 9th resident, who was not involved in the recent lawsuit by two homeowners, was hopeful that the new Make It Right suit might signal the organization’s readiness to address the homeowners’ issues.

“It saddens me that it took MIR so long to take action since the organization has been aware of homeowner issues for several years,” said Kamaria Allen, 35, who moved out of her Make It Right Home after less than a year because of problems including leaks and mold. “Nevertheless, the lawsuit against the architect gives me hope that the process for progress has begun.”

Allen sold her Make It Right home back to the charity after the organization failed to repair the leaks and remove the mold, she says, which she believes negatively affected her health. Allen currently lives with her parents, who also bought a Make It Right home, which has similar defects, Allen said.

“Thanks to the recent widespread media coverage, MIR had to take action and face the truth that residents have been living,” Allen said. “I believe that Make It Right will make it right for this community one way or another.”