Box That Held the Bones of Jesus’ Brother?

World News – A limestone box said to have once held the bones of the brother of Jesus was at the center of the most controversial forgery case in decades — and it was allegedly vandalized by the Israeli government before being returned to its owner. 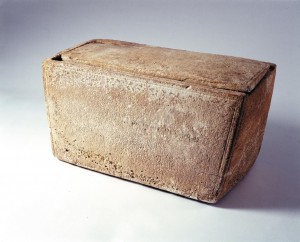 Called the James Ossuary, it is a small stone box with an inscription that reads, “James, son of Joseph, brother of Jesus.”

That Jesus had a sibling at all is a controversial idea disputed by the Roman Catholic Church. If the box itself were authentic, it would be considered the first physical link to Jesus.

A three-judge panel of Israeli Supreme Court justices ordered the Israel Antiquities Authority (IAA) to return the box and several other artifacts to antiquities collector Oded Golan last month, after the agency spent 10 years accusing Golan of forging the items.

The box will soon go on display for the public to view for the first time since 2002. There’s just one problem: Reddish stains now appear over the inscription, remnants of a silicon substance applied by the Israel Police Forensics Laboratory to help determine the authenticity of the James ossuary.

The contamination might make it impossible to ever fully determine if this ancient relic is forged or real.

“The Israeli police, with permission of the IAA, made a red silicon mold of the inscription — destroying the ‘letter patina’ by pulling out this ‘soft’ patina … thus destroying evidence,” said the geologists who first studied the ossuary in 2002, according to Jerusalem-based journalist Matthew Kalman who has covered Golan’s trial extensively. “Consequently, the alleged small amount of masking letter patina is absent now and cannot be studied further.”

A patina is a tarnish that forms on objects after a long period of time. It is one factor archaeologists use to determine the authenticity of artifacts.

Judge Aharon Farkash who presided over the case agreed that the process of making the mold left damage to the box and left him with reasonable doubt regarding Golan’s guilty charge, Kalman reported.

“There is no dispute that the casting of the silicon by the forensics people changed the physical condition of the inscription of the ossuary,” Judge Farkash said.

There is also confusion over the decision to create a silicon mold. The police officer who led the investigation testified that he asked the forensics lab to only “examine” the ossuary and not to carry out invasive tests, according to Kalman’s report.

An IAA member who was part of the team of experts that ruled the ossuary a fake testified for the defense in regards to the contamination.

“I saw a picture of what happened to the ossuary,” Orna Cohen told the court, calling it “contaminated,” according to Kalman. “It will be hard to say anything about the ossuary itself.”

Golan spoke out over his frustration that the ossuary was damaged when returned to him.

“It’s not in the same condition as before the trial,” Golan told Kalman. “The inscription was defaced, contaminated. The government said the second half of the inscription was forged — the words ‘brother of Jesus’ — and that’s where the major damage has been done.”