The Costa Rican government is just sitting back pointing fingers while the border trail proves over and over again that they used the money for construction for personal means. The collapse of five bridges on Route 1856 is forcing residents of the northern border to long detours on roads suitable only for four wheel drive vehicles.  There are also 3 other bridges on the verge of falling. 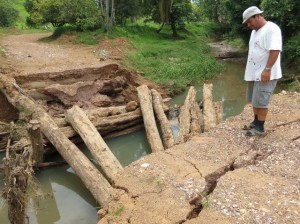 Some are also reusing the Nicaraguan San Juan River, which shouldtheoretically be avoided by the trail.

For residents of Chorreras, destroying the bridge over the creek Venada involves using the shortest route, 5 km to reach Tiricias.

The alternative land use that is left is the way The Jocote Oak-Moravian, which forces an additional 22 km journey on foot or horseback.

In town, only two of the fourteen families have cars.

The other option is to navigate the river San Juan, but they do not want to do that again, Gregorio Hurtado said.

Meanwhile, the service output of the bridges over the Creek Rosalie Boca Tapada, and Cureñón in Cureña de Sarapiqui, placed in a similar situation to those living in Santa Rita, the Recreation, Boca San Carlos, Palo Seco, Ochoa, carriage and Remolinito.

The alternate route to get to Golfito de Sarapiqui, and thence to Pital de San Carlos, is the path that starts in Santa Rita de Pital and passes the Hotel Laguna del Lagarto.

“The problem is that that road, which has stretches in lousy conditions, there is no bus service. So we have to walk about four hours. That is, it took most of the morning or afternoon walking through the mud, “said Maria Martinez peasant.

Cureña neighbors could also go via Drum-Golfito, but only on foot, for the collapse of the passage through the Cureñón and vehicles can not pass.

“More bad we can not be because we are now extremely difficult to get to market centers for agricultural products and livestock. Worse will be if the bridges are collapsing like a house of cards, “said Martinez.

She admits that the opening of the trail they raised many expectations of progress, but now feel great disappointment.

“First we had a great joy and I feel as if I had taken a big blow to the head, stunned by blunder,” he added.

Three more bridges are threatening to fall at any moment.

The locals qualify hard errors and claim that they warned about the poor quality of work, but say that nobody paid attention to complaints.

“I worry because in the winter is just beginning and we lost five bridges already. I wonder what will happen when the rains increase, “said Carlos Rodriguez, of San Carlos Pocosol.