Black holes have become synonymous with man-made darkness, vortices sucking people into an abyss of disorder and despair from which there is no escape. But cosmically, and perhaps comically, black holes are integral to the formation and ongoing creation of the universe. 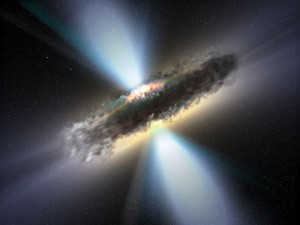 When black holes were first discovered, physicists wanted to banish them, since the laws of physics break down at their border. As one physicist put it, “the event horizon of a black hole is the edge of time and space in the universe as we know it.”

Of course, the key phrase here is, “as we know it.” As the same astrophysicist put it, “there must be bigger laws we just don’t understand yet.”

Einstein’s theory of relativity predicted that sufficiently dense mass would buckle spacetime, forming a black hole from which nothing, not even light could escape. It was a mind-boggling concept before black holes were proven to exist through indirect observations (obviously, since in themselves they are invisible).

As far as I understand them, there are two kinds of gravitational black holes—stellar and supermassive, though that may be a distinction without a difference. A stellar black hole forms when a huge star completely collapses from gravity at the end of its life cycle.

It suddenly shrinks to a small fraction of its former size, becoming incalculably dense, forming a black hole. Then it gobbles up any stars or planets in its vicinity. If there is enough matter for it to ingest, it becomes a supermassive black hole.

But most supermassive black holes, which can be millions of times the mass of our sun (conveniently called solar masses) exist at the center of galaxies, perhaps all galaxies. Indeed, one theory holds that black holes 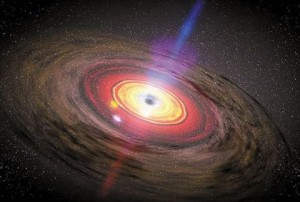 formed in plasma clouds before there were stars, and were indispensable to the formation of the universe, by generating variations in the huge clouds of primordial elements, which coalesced through ordinary gravity into galaxies and stars.

The universe continues to be indescribably stranger and more surprising than all scientific theory and knowledge. My intent is a meditation on time however. Some questions and proposed insights emerge from considering the negation of spacetime that a black hole represents.

If physical time is itself a provisional construct of the universe, then how much more so is psychological time? Indeed, does time actually exist at all, or is there only the event horizon of the present?

Not that scientists can’t see how things unfolded in the past, and predict, with varying degrees of accuracy, how things will unfold in the future. But predictability and control, the warp and woof of science, are robbing people of mystery and wonder. And they lose all meaning when considering black holes.

There are three meanings to the word ‘singularity.’ There’s gravitational singularity—the focal point of infinitely dense gravity, which collapses spacetime and from which nothing in the material universe escapes.

Then there’s a nonsensical notion called technological singularity, the supposed theoretical emergence of a super-intelligence through some miracle of technology. According to this claptrap, advanced computer minds will soon produce ever more advanced computer minds, outstripping human intelligence, completely and unpredictably changing human affairs, except sexually of course.

Seriously, this kind of singularity hardly deserves comment, since it depends on a narrow, cognitive definition of mind, and assumes that intelligence is a function of cognition. 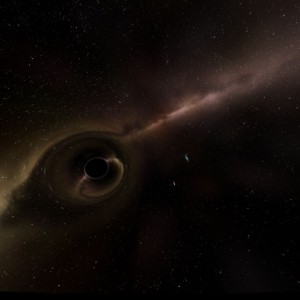 This is where psychological singularity comes into the picture. That’s the point where human stupidity becomes so dense that the only escape from its black hole is by learning how to initiate a state of negation.

When I open my computer this morning and read the headline, “The Man Princess Diana Wanted to Marry,” I cannot help but feel humankind is close to psychological singularity.

Content-consciousness is matter, and has become so dense (in both senses of the word) in the human brain that it’s formed a black hole. It’s threatening to swallow all but the strongest spirits, and is a fearsome phenomenon, unlike gravitational black holes, which are integral to creation.

There may actually soon be a singularity psychologically, not technologically, a point at which the human mind and heart can absorb no more man-made darkness, and faces a change or perish scenario.

The future of humanity may depend, as a friend put it, on “people who are not willing to be submerged by darkness, and who continue to believe in what beauty is left and the power of awareness and community to heal.”

Though the cognitive capability of artificial intelligence (a misnomer if there ever was one) may surpass that of humans, it only adds to the urgency that human beings awaken true intelligence.

But what is true intelligence? It includes but isn’t defined by cognition, intellect and reason, even when emotion, feeling and affect are factored in. Intelligence is characterized by insight, understanding and compassion, which can only be awakened in the moment.

The early morning light reflects lightly off the stream, dancing on the ripples of the current. It illuminates the big, heart-shaped leaves that overhang the flowing water, making them look almost luminescent.

The sound of the lapping creek is in the foreground, and traffic din from one of the main arteries in town is in the background. Without division or exclusion, there’s no disturbance or distraction. In short, even man seems part of the beauty of the morning.

Ending time is the portal to infinity and the immeasurable in the present. Infinity and the immeasurable are not in space or time, but only through being completely present in the present, when thought, memory and time have ceased operating. It’s a strange thing, stranger than a black hole, but being has its origin and anchor in the nothingness and emptiness of the infinite present.