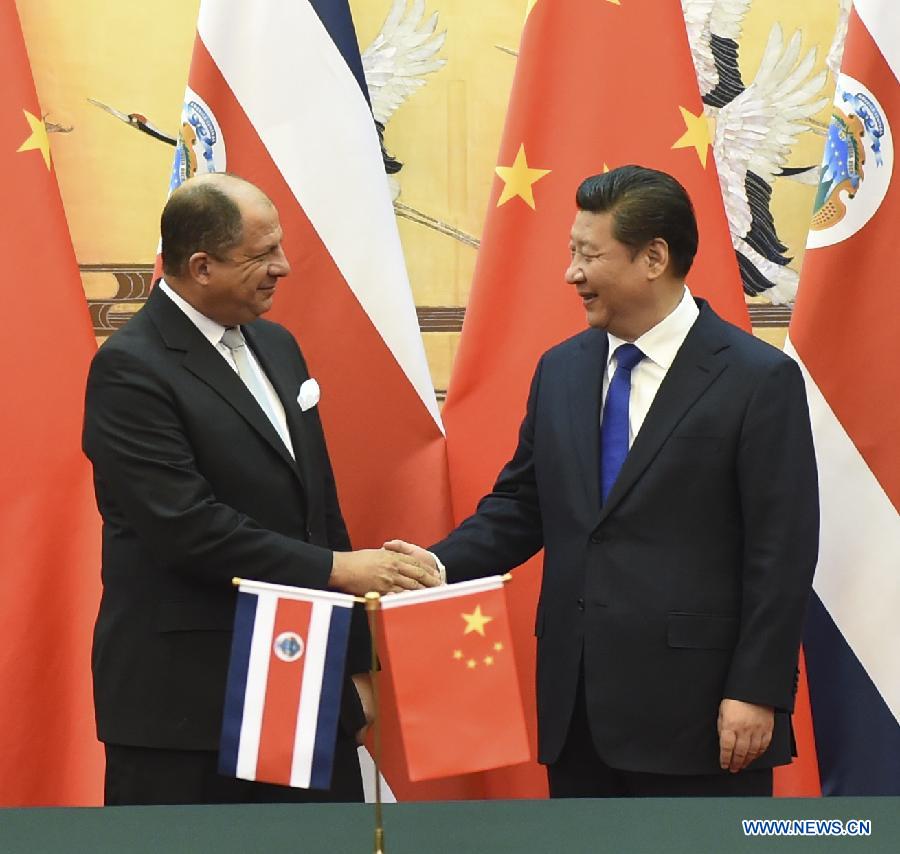 During the talks, Xi said that China and Costa Rica should set a good example of friendly cooperation between countries of different sizes with different national conditions. The two sides should advance bilateral ties from a strategic perspective and support each other on their core interests.

Stressing the significance of frequent high-level interactions, Xi proposed the two sides boost cooperation on the construction of special economic zones, infrastructure, agricultural technology, telecommunications and clean energy among others.

Xi said that China stands ready to boost tourism cooperation with Costa Rica, calling on the Costa Rica side to facilitate entry procedures for Chinese travellers.

He also suggested the two countries increase communication on international and regional affairs, such as climate change.

The two countries established diplomatic relations on June 1, 2007. Expressing his gratitude for China’s support, Solis said Costa Rica attaches great importance to the ties with China and hopes to enhance political trust and boost cooperation with China on technology, education, investment and infrastructure.

Costa Rica welcomes Chinese teachers, researchers, artists and coaches to the country for exchanges and will make things easier for Chinese tourists.

The two presidents agreed to make a joint action plan at an early date for 2016 to 2020 in various fields.

Solis is paying a state visit to China on Jan. 4-10 at Xi’s invitation. The two presidents are scheduled to attend the opening of the first ministerial meeting of the China-CELAC (Community of Latin American and Caribbean States) forum in Beijing later this week.

Commenting on Costa Rica’s contribution to China-CELAC cooperation, Xi said China values Costa Rica’s role in Latin America and will work with all CELAC members to make the ministerial meeting a success. Costa Rica chairs the CELAC from January 2014 to January 2015.

After their talks at the Great Hall of the People, the two presidents witnessed some deals on economic cooperation.

Prior to the talks, Xi held a red-carpet ceremony to welcome the visiting president.

A Solution to Costa Rica’s Traffic Problem in San Jose?