World News – This is obviously one of the worst cover ups in US history.  You do not all of a sudden resign a week before having to testify about the Benghazi attack because you cheated on your not good looking wife. Let’s just say it how it is, he did not want to lie so he resigned. 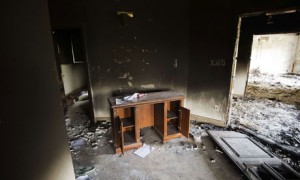 Biographer Paula Broadwell could be facing questions about whether she revealed classified information about the Libya attack that she was privy to due to her relationship with then-CIA Director David Petraeus.

At an Oct. 26 speech at her alma mater, the University of Denver, on the same day that Fox News reported that the rescue team at the CIA annex had been denied help, Broadwell was asked about Petraeus’ handling of the Benghazi situation.

Broadwell quoted the Fox News report when she said: “The facts that came out today were that the ground forces there at the CIA annex, which is different from the consulate, were requesting reinforcements.”

Broadwell went on to explain more sensitive details from the Benghazi attacks, particularly concerning what the real cause might have been.

“Now, I don’t know if a lot of you heard this, but the CIA annex had actually, um, had taken a couple of Libyan militia 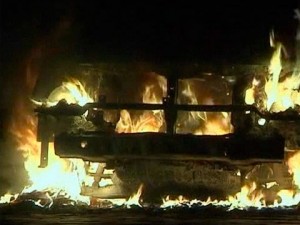 members prisoner and they think that the attack on the consulate was an effort to try to get these prisoners back. So that’s still being vetted.”

In the original Oct. 26 Fox News report, sources at the annex said that the CIA’s Global Response Staff had handed over three Libyan militia members to the Libyan authorities who came to rescue the 30 Americans in the early hours of Sept. 12.

A well-placed Washington source confirms to Fox News that there were Libyan militiamen being held at the CIA annex in Benghazi and that their presence was being looked at as a possible motive for the staged attack on the consulate and annex that night.

According to multiple intelligence sources who have served in Benghazi, there were more than just Libyan militia members who were held and interrogated by CIA contractors at the CIA annex in the days prior to the attack. Other prisoners from additional countries in Africa and the Middle East were brought to this location.

The Libya annex was the largest CIA station in North Africa, and two weeks prior to the attack, the CIA was preparing to shut it down. Most prisoners, according to British and American intelligence sources, had been moved two weeks earlier.
The CIA, though, categorically denied these allegations, saying: “The CIA has not had detention authority since January 2009, when Executive Order 13491 was issued. Any suggestion that the agency is still in the detention business is uninformed and baseless.”

Broadwell’s affair with Petraeus was likely known to Holly Petraeus, according to family friends. The FBI reportedly knew about it months beforehand and White House Counterterrorism adviser John Brennan reportedly was aware that there was a relationship as early as the summer of 2011.

The White House strongly denied that Brennan was aware so early.

“It is irresponsible and flat out wrong for Fox News to run an anonymous, unsubstantiated, and blatantly false accusation, as Mr. Brennan was first made aware of the issue last Wednesday,” spokesman Tommy Vietor said.
Broadwell, whose affair with Petraeus reportedly ended earlier this year, continued to serve as an informal spokesman for the CIA director. She suggests in her Denver speech that Petraeus knew almost immediately that the attack was a terror attack — possibly to free militia members.

A few days later, Petraeus testified in a closed session to Congress that the attack was due in large part to an anti-Islam video and a spontaneous uprising, according to reports from the hearing.

Congressional leaders say privately they believe they were lied to by Petraeus when he testified shortly after the attack. Some of these members already considered charging Petraeus with perjury, but said they planned to withhold judgment until he testified this week. After resigning as CIA director, the CIA said Acting Director Mike Morrell would testify in his place.

All of this raises the question: What was the CIA really doing in Benghazi in addition to searching for Qaddafi’s stash of more than 22,000 shoulder-held missiles that could bring down commercial airplanes, and who in the White House knew exactly what the CIA was up to?

Who writes this stuff? lol. This is as meaningless as Texas trying to succeed from the Union for the 100th time. Pointless, irrelevant and much to do about nothing. What did you think Consulates were for? Parties and Galas! This is just funny. The US is a world economic powerhouse nuclear superpower the allows multitudes of nations their personal liberties for in which they could not afford to do themselves. Latin America gets the free handmeouts, with Costa Rica being the smarter and taking free miltary aid. WOW! This is the reality of it. No freedom is for free, if the world wants protection, then they need to give a little to get a lot.