Before Midnight Movie Review – As someone that has basically given up on the illusion that is love it is nice to envision it again in this trilogy with Celine and Jesse.  From their falling in love in Before Sunrise to their hearts becoming one again in Before Sunset. 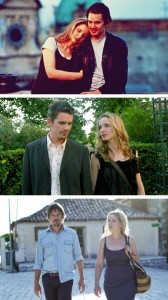 The third installment in the talky, walky film series he’s written with the actors Ethan Hawke and Julie Delpy. Supposedly this is the end of the series, making the project a trilogy, but there’s wonderfully nothing finite about the film, which is currently part of the Tribeca Film Festival. The two lives in this film are more concrete and established than they are in Before Sunrise or Before Sunset, but the same sense of ambiguity that made the previous two films such fluid and tantalizing delights is fully present in Before Midnight. Linklater, Delpy, and Hawke, all wizards of simplicity and naturalness, have made something that’s sublimely honest and direct, and yet never heavy, or overstated. Though a little bluer and angrier than the previous two movies, Before Midnight is still just as charming, as appealing and ultimately enriching. It lends some much needed grace to the trilogy form.

Eighteen years ago we were introduced to Celine and Jesse, who spent their first meeting as young dreamers wandering around the streets of Vienna. Then nine years later, saddled with relationships and career issues, they reconnected in Paris and, in one of the most deliciously ambiguous endings in movie history, seemed to succumb to their old chemistry. It’s strange to think that at that point they’d only spent two days of their lives together, because now, another nine years later, they are in a committed, long-term relationship. They have twin daughters (Jesse also has a son, whom we meet in the film’s wonderful, quietly heartbreaking first scene) and have built all the messy details of a life together. We’re of course curious to hear how they’ve spent the last almost-decade, but the film blessedly doles out exposition and back story in only the most subtle and credible ways. Mostly we are privy only to the shorthand vernacular of the relationship, unexplained references and glancing mentions referring to much bigger stories hidden in the past. Jesse and Celine’s philosophical interests have changed — from expounding on the future inSunrise, to blearily dissecting the present in Sunset, to bickering about the past in Midnight — but their ease with one another, the sparkle of two people who are great at talking to one another, remains just the same.

The setting this time around is the Southern Peloponnese, specifically a small coastal town near Kalamata. Jesse, Celine, and family are the guests of an older English writer, who lives on a rocky old estate that has a half-salon, half-commune feel. An intelligent, earthy, and international crowd, the film’s other characters feel like people Woody Allen would create were he to move to the Berkshires and chill out for a few years. Which isn’t to say that they’re wooden or unlikable, far from it. They synch up perfectly with theBefore rhythm, and it’s interesting to hear from some other people for the first time in this series, which is largely set up as a binary system.

After a lovely, rambling dinner scene, though, Jesse and Celine are alone again, walking to a nearby hotel where their 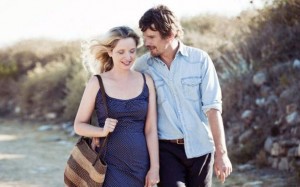 friends have booked them a room for the night as something of a going away present. And so we’re back with Hawke and Delpy walking and talking, talking and walking, an activity they have not lost the talent for in their forties. But because there is history now, context, the conversation is less general than it once was; we are dealing with specific foibles and fears, little arguments bubble up here and there but then dribble away. Hawke and Delpy have created an astoundingly believable relationship here, one that has all the grain and texture of the real thing. Jesse is still his charming self, but he’s gotten a little tired, the old hunger for big definitions, the grasping for larger truths, has waned a bit. He’s now more concerned with his interior life — worries about his son, who lives with his mother in Chicago, dominate in this brief glimpse. Meanwhile Celine, always the more pragmatic and even aloof half, has gotten just the slightest bit sour, there’s a fatalism lurking in a lot of what she says. That may sound like a depressing combination, he subdued and she hardened, and it is a little, but only in the way that all aging can be, well, a little sad, or a little disappointing.

The great thing about the Before films is that they’re not really about any one thing in particular, but the loose themes of Midnight include, yes, aging, but also the nature of compromise, how it strengthens a bond while also creating little resentments which can fester and corrode over time. Jesse and Celine are reasonably content with their lives, but is contentment enough? That’s the question hovering over the film from the very beginning, filling the summery air with just the tiniest bit of tension. Hawke and Delpy perfectly play all the beats of an underlying conflict making its way to the light, and Linklater simply stands back and lets them. Before Midnight is sun-splashed and gorgeous, but the filmmaking is also refreshingly spare. Through long takes, Linklater gives scenes room to breathe, contracting and expanding as the dialogue requires. It’s such a joy to just watch these people talk, because they’re in an environment tailor-made for just that.

That’s all I’m going to say about the film, which is the real must-see of this summer. (It will be in theaters in late May.) It’s wonderful to spend some more time with these people, in the world that their real-life counterparts have so smartly and lovingly crafted for them. Small but practically bursting with feeling and thought, Before Midnight is transfixing in a way very few movies are. Really, I can only think of two others.

Only in Costa Rica for Week of April 22nd