Costa Rica News – We all know how popular bird watching is in Costa Rica, but there are some behind the scenes duties that these beautiful creatures perform. Would you believe that they are protecting one of Costa Rica’s cash crops? 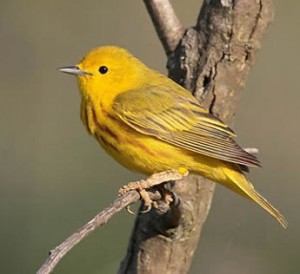 The yellow warbler may not pull a perfect latte, but it turns out it’s a friend to coffee drinkers all the same. Research in Costa Rica shows that hungry warblers and other birds significantly reduce damage by a devastating coffee pest, the coffee berry borer beetle.

A study found that insectivorous birds cut infestations by the beetle Hypothenemus hampeiby about half, saving a medium-sized coffee farm up to US$9,400 over a year’s harvest — roughly equal to Costa Rica’s average per-capita income. The results, published in Ecology Letters1, not only offer hope to farmers battling the beetle, but also provide an incentive to protect wildlife habitat: the more forest grew on and near a coffee farm, the more birds the farm had, and the lower its infestation rates were.

“Based on this study, we know that native wildlife can provide you with a pretty significant benefit,” says Daniel Karp, a conservation biologist at Stanford University in California, who led the study. “Incorporating their conservation into your management of pests is absolutely something you should do.”

The borer beetle is originally from Africa, but has spread to nearly every coffee-producing region. The insect is invulnerable to most pesticides, and can cost farmers up to 75% of their crop. To learn whether birds can mitigate the problem, Karp and his colleagues covered coffee bushes on two Costa Rican plantations with mesh fine enough to keep out birds.

They found that avian predators did indeed pick off a lot of beetles: in the rainy season — peak time for beetle activity — borer infestation almost doubled when birds were excluded from foraging on coffee shrubs, rising from 4.6% to 8.5%. By analysing bird faeces for beetle DNA, the team identified the yellow warbler (Setophaga petechia) and four other species as beetle eaters.

Next, the researchers combined data about bird abundance, forest cover and beetle populations from six coffee plantations. They found that beetle-eating birds were most common at sites with lots of stretches of forest nearby, and that beetle infestations were slightly more severe at sites that were not surrounded by abundant forest. Furthermore, many of the avian exterminators were living in small scraps of unprotected woodland, rather than in big nature reserves.

The finding “is definitely good news for Costa Rican farmers”, says Matthew Johnson, a conservation ecologist at Humboldt State University in Arcata, California. He and his colleagues have previously found that birds help to protect the famous Jamaican Blue Mountain coffee crop from the borer beetle2, and he is happy to see that Jamaican birds are not alone in their taste for the pest. But Johnson is sceptical about the impact of forest cover.

The link between infestation and forest coverage “is obviously not rock-solid”, he says. Karp and colleagues’ results show only a very modest drop in borers as forest coverage grows, he points out, and Johnson would like to see stronger evidence that the effect is real.

Karp responds that the relationship between forest coverage and beetle infestation is statistically significant and that another team working in Costa Rica reported a similar effect last year3. And his own team’s core finding still stands: birds reduce the beetles’ dirty work. On one farm, hungry birds warded off beetles from coffee beans worth around 4% of the total value of the annual crop.

That may not sound like much, says Karp, but “in farming, every little bit helps, especially because often you’re barely scraping by”.

By Traci Watson from Nature.com