Costa Rica Travel – While Barrio Amon is the oldest historical district in San Jose, it is currently being revived. The oldest San Jose quarter, full of historic houses (in the past belonged to coffee barons), that often are converted into hotels. To the north it`s limited by Torres river and 13th avenida, to the south by 7th avenida, to the east by 9th street and to the west by the Central Street. Mostly, it is being revived by hotels and bars involved in the sex tourism trade, however, if you appreciate historical old buildings, and don’t mind walking around in strange neighborhoods, Barrio Amon should not be missed. 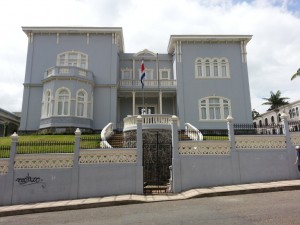 Many buildings were designed at the end of XIX century by Amon Fasileau Duplantier-a brother-in-law of Hipolit Tournon which derived profits from coffee cultivating. In 1892 Amon suggested that municipal authorities should build the new quarter in San Jose. In January 1894 the contract was entered. Soon to a new quarter the richest inhabitants started to settle, and they were building very elegant houses in different styles; victorian, eclectical, neoclassic and modern.

You can see as you walk around the French influence around the neighborhood. Inside some of the hotels, you can see the preservation of many old tiles, handrails, and wood that many of the new developers are trying to keep for their new builds. Some other original structures include gargoyles “to ward off evil spirits”, the frescoes on the walls, painted by Francisco Amighetti, mosaics of Don Quixote made by Guido Sáenz and other works of recognized Costa Rican artists who left their mark on this site that was declared “Historic Architectural Heritage” in 1998. By law, none of them can be demolished or remodeled without permission because they are part of the national identity.

A beautiful and famous building in the district is Casa 927 was designated to be a gathering place for artists of all types and also a center that will impose a trademark of sorts on art work produced in Costa Rica. The building was dedicated in 2011 for this purpose.

My friend and I walked around all the streets and ogled at all the buildings. They are beautiful in their own right and the current owners have done a lot to improve the buildings while continuing to keep the integrity of the architectural designs. On display at the Museo de Oro in one of their temporary exhibits, there is a history of the Colon and also the design of the Colon which includes architecture from all around Costa Rica, including historic buildings in Barrio Amon that were chosen for their uniqueness to be places on some of the past Colones. When you get to San Jose, have a cab driver take you to Barrio Amon and drop you off. Walk the rest of the way and you will see some very beautiful buildings with amazing architecture. Stop in for a drink at one of the hotels, and view the beautiful interior.

One hotel we visited was the Dunn Inn which has some mosaic tiles still on the floor to the entry way, and lots of the original dark wood from the past mansion that used to occupy some wealthy coffee baron. We were trying to find another bar that had been converted from an interesting old house, but as you have probably read in the paper before, getting directions in Costa Rica is crazy and almost impossible. We asked a person who told us to go 3 blocks west, then we asked someone else who told us to go back the way we came 10 blocks. Next, we thought a cab driver was our best bet; he was at least honest and said that he had no idea where this place was that we were asking him about, so we decided to end our time in San Jose and head back to San Joaquin.

How to Apply for a One-Way Mars Trip (Video)