Costa Rica News – A week after a vacationer was stranded in the San Juan de Dios Hospital in Costa Rica and died, it seems that the bacteria that probably killed him is spreading throughout the hospital. Ok public health system, a problem has been found what are you doing to fix it……we are in Costa Rica so not much. 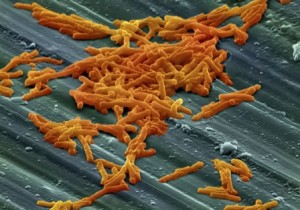 Hospital San Juan de Dios prevention protocol was activated because of an increase in cases of infection with the bacterium Clostridium difficile.

Clostridium difficile, or C. diff., is a type of bacteria that lives in many people’s intestines.

The biggest risk factor is antibiotic use, especially a type of antibiotic that is broad-spectrum (is able to treat a wide variety of bacteria) or if you have been taking antibiotics for an extended period of time.  Ding, Ding, Ding……a bell should go off in your heads.  When you go to a Costa Rica hospital until they actually diagnose you for what ails you most patients are given the same antibiotics for everything.

The goal should be to actually diagnose the specific ailment and prescribed an antibiotic that will create antibodies to fight this bacteria.

Through a press release it was stated that the medical center normally expects two to six cases of this bacterium per week, but that between the 18th and 19th weeks of this year (from April 29th to May 12th) there were eight cases.

The preventive measures that are said to have been implemented are to isolate existing cases, to reinforce hand hygiene, to use antibiotics restrict risk, to disinfect the area and to communicate with the patients’ families. Great….so they want to use more antibiotics….which is the biggest cause of this bacterium.

Maybe they missed that day in medical school.

This organism causes fever, vomiting, severe diarrhea and damage the colon and, in some cases, death.

In 2009 this bacterium killed 17 people in the San Juan de Dios hospital.

This is why I encourage expats living in Costa Rica or tourists travelling to Costa Rica to make sure they purchase insurance that covers them in the private hospital system in Costa Rica.

5 Questions About Moving to Costa Rica

This is not just in Costa Rica. Also we have not lost a day of Med School. But if you have the answer, you can tell us.
Now for those smart enough to read about this,the average human digestive tract is home to as many as 1,000 species of microorganisms. Most of them are harmless — or even helpful — under normal circumstances. But when something upsets the balance of these organisms in your gut, otherwise harmless bacteria can grow out of control and make you sick. One of the worst offenders is a bacterium called Clostridium difficile (C. difficile, or C. diff). As the bacteria overgrow they release toxins that attack the lining of the intestines, causing a condition called Clostridium difficile colitis.

Though relatively rare compared to other intestinal bacteria, C. diff is one of the most important causes of infectious diarrhea in the world wide.In some cases, C. diff infection can lead to a hole in the intestines, which can be fatal if not treated immediately.
C. diff can be diagnosed by stool specimens tested for the toxins. In some cases, a colonoscopy may be needed for diagnosis and more tests ordered.
Treatments for C. diff
Doctors typically prescribe a 10-day course of one of the following oral antibiotics: metronidazole (Flagyl), Dificid (fidaxomicin), or vancomycin (Vancocin). Flagyl is usually tried first. Improvement usually happens within 72 hours after starting antibiotics, but the diarrhea may return temporarily. Another round of antibiotics is needed in about 25% of cases.
In addition to prescribed medications, treatment may include:
Probiotics. Available in most drug and health food stores without a prescription, probiotics are “good” bacteria that colonize in the gut and may help keep C. diff. infection from recurring if taken along with prescribed medicines.
Fluids. Drinking plenty of water and other fluids or getting intravenous fluids can help guard against dehydration from diarrhea.
If you think you may have a C. diff infection, speak to your doctor before using an anti-diarrhea medicine. Stopping the diarrhea could actually make the C. diff infection worse.

What is the typical amount of deaths by C Diff?…..17 in a year seems high in one hospital

Also if I wanted to go to Web MD and copy the symptoms and treatment I could have gone there too. http://www.webmd.com/digestive-disorders/clostridium-difficile-colitis