For another example of how green Costa Rica is and how they are so very concerned about keeping the environment clean is the poop that is being found in the rivers.  I am not a big fan of swimming in toilets but the Costa Rican government seems to think that tourists like it. The Tempisque River, one of the most important and largest of the Pacific north of Costa Rica are being polluted with fecal matter from several tributaries of the basin. 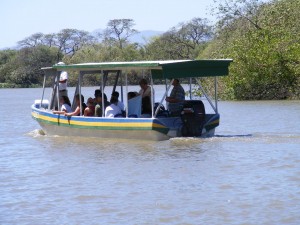 For this reason, water can not be used from Tempisque, right now, for your drinking-to-human use, nor for agriculture, at least at several points in the basin.  The warning of the situation of that river consists Guanacaste in a recent study of water quality in Guanacaste by the National Water Laboratory, part of the Costa Rican Institute of Aqueducts and Sewers (AyA).

The laboratory water sampled at 16 points along the entire Tempisque River.

Although rivers Tempisquito, Cañas and Liberia are the ones that lead to more pollution Tempisque, is the largest tributary Liberian which presents problems.

For example, in the neighborhood Capulin, located near the center of Liberia, is not recommended for drinking water. In other areas are also closed to swimming, boating and landscaping, as detected coliform level exceeds the maximum allowed.

“Practically, throughout the basin, it is advisable to use its waters for activities such as clam and shrimp farming,” according to the report slogan.

On the use of the Tempisque for irrigation work, the laboratory indicates that this “is an activity that should be in the middle of the basin.” At this point there are crowded areas such as Philadelphia Carrillo.

Well about every toilet either connects with the river or into septic tank. There no sewage plants to clean the water before being dumped. Only going to get worst nothing about treatment.