Costa Rica News – Costa Rica’s violent crime rate is low, but not at zero. Unfortunately, two buses and a trailer container were burned, a few days days ago, in what seems like a criminal act, according to police. 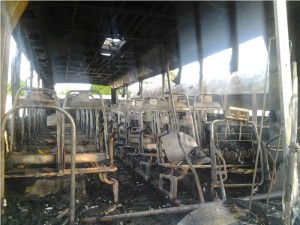 The fire was discovered at 5:40 am, after neighbors heard a loud explosion. This took place in the Buenos Aires La Pinera community in Puntarenas.

A man named Martinez called 911 upon seeing the flames. The vehicles were old and obsolete. They used to transport workers for the pineapple company Pindeco. There are no guards on the property, so no one was seen lurking around the site.

It took 12 minutes to put out the flames, once the firefighters arrived at the site. The deputy chief of the local fire station, Gilberth Castro, said, “They were units that had no engine, so it’s strange that they burned.”

Another strange aspect of the case is that the container and buses were eight meters apart. That makes it very unlikely that they would naturally catch on fire at the same time. The Judicial Investigation Organization will be investigating the incident. The Red Cross responded to the emergency, as well, in case of finding any people affected. There were no injuries to people.