Costa Rica News – The Costa Rican government really knows how to set good examples for the Costa Rican people.  Pay your taxes, do not be corrupt, do not steal, follow the laws…….but it is ok if we do not.  Leadership by example is the only way things will change in Costa Rica, and that is not happening with the Chinchilla administration. 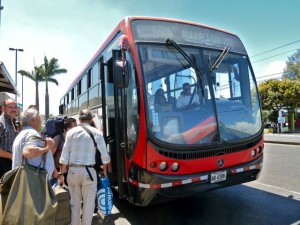 Nearly 1,000 public transport vehicles are on the list of defaulters on their marchamo for 2012, according to the National Insurance Institute (INS). Marchamo is the obligatory ‘liability’ insurance carried on all vehicles in Costa Rica.

“Traffic officers are those who can take these vehicles off the road if  have not paid,” said Eduardo Fernandez, head of Solidarity Insurance INS.

In case of a default, these vehicles lack the policy to compensate people who are injured in traffic accidents involving vehicles.

Until yesterday, the Council did not know the figures used by the INS because there is no mechanism for sharing this information.

Mario Badilla, director of CTP, said he did not know the list and, following consultation of this newspaper, asked the INS forward it. So they are saying that they did not pay because they did not know. Pleading ignorance.  It is like saying I did not know that after I paid every year that this year I had to pay as well.

“The Council will not grant a permit if you are not up with the rights of movement,” said Badilla.

The deadline to pay without penalty expired on December 31.

Traveling by Car in Costa Rica – Tips and Advice