Costa Rica Sports News –  As the clock ticked onwards, the memories of years ago and that CONCACAF Champions League horror show against Santos Laguna started to surface. Alajuelense mounted the inevitable comeback. The tension ratcheted with each passing moment. The fears of another painful late demise surfaced once more. 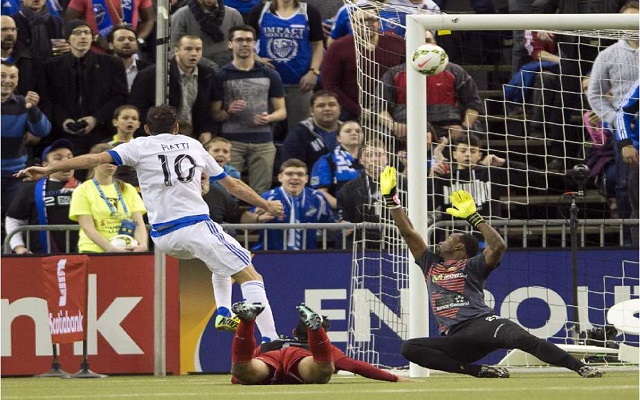 This battle-hardened group quelled them somehow. They lost on the night in this Costa Rican cauldron, but they secured the ultimate achievement by the final whistle nevertheless. Somehow, some way, the Impact are headed to the CONCACAF Champions League final after a 4-2 defeat allowed them to advance on away goals after the tie finished 4-4 on aggregate.

Impact forward Jack McInerney opened the scoring three minutes before halftime with a precious away goal. Pablo Gabas struck twice in the first 15 minutes of the second half to breathe new life into Alajuelense’s quest to reach the Champions League final for the first time, but second-half substitute Andrés Romero snatched the eventually decisive goal after 72 minutes.

Allen Guevara responded seven minutes later and Jonathan McDonald sliced the aggregate deficit to one in second-half stoppage time, but the Impact held out to become the first Canadian team and the second MLS side (Real Salt Lake, 2011) to reach the final in the Champions League era.

It is an achievement of considerable import given the lack of MLS success in this tournament and the peril of protecting any sort of advantage in Costa Rica.

Montréal entered this tournament last year in poor MLS form, but the Impact meandered past New York Red Bulls in the group stage to give themselves a chance to regroup ahead of the quarterfinals. Impact coach Frank Klopas stocked his side with veteran players and watched them grasp the opportunity with both hands.

The performances against Pachuca in the quarters and Alajuelense in the semis revealed a team capable of rising to the occasion and using the opportunities afforded on the counter to punish teams for pursuing the game too ardently.

All of those traits emerged during the fraught second leg at Estadio Alejandro Morera Soto. Montréal clawed and scraped through a difficult assignment with their ability to take advantage of their two best chances proving the difference in the game.

McInerney led the line in the wake of Cameron Porter’s season-ending injury and validated his place by extending the aggregate lead to three shortly before halftime. Dominic Oduro picked up his head and slid a tempting cross through the goal area. McInerney arrived at the perfect time and then smashed home to set the Impact on the proper course.

The goal eventually prompted Alajuelense to improve after a poor first half and pile on the pressure after the interval. Gabas revived his side by striking twice between the start of the second half and the hour mark. Both goals came from set pieces as the home side took advantage of the Impact’s penchant for fouling inside their own half.

Gabas’ contributions placed the game on a knife edge, but Romero climbed off the bench to secure it nevertheless. His composure allowed him to complete an incisive Impact move by gliding around a couple of Alajuelense defenders and slotting into the net to level the proceedings on the night.

The goal proved crucial to reinforce the efforts in the final quarter of an hour. Guevara took advantage of some slack Impact defending to grab the home side’s third, but the vigor of their efforts betrayed the daunting task ahead after Romero’s riposte. McDonald eventually threw his side a lifeline at the death, but it proved too little, too late on the night and in the tie.

As the final whistle blew in Costa Rica, the Impact poured onto the field in celebration. They will feature in the two-legged final on April 22 (site TBD) and April 29 (Olympic Stadium) and wait patiently to learn whether they will face Herediano or Club América on Wednesday night (10:00p.m. ET, FOX Sports 2, FOX Sports Go).

The identity of their opponent — Herediano enters the second leg at Estadio Azteca with a 3-0 advantage on aggregate — matters little at this stage, though. It is about the opportunity ahead for the Impact later this month and their increasing belief in their ability to take it.