Air Taxis Are About to Take Off

Technology News – A few years from now, grabbing a taxi could mean taking to the skies.

Last week Dubai sent an air taxi on a five-minute test flight — its first unmanned flight over a city. The dronelike vehicle, designed by German aviation start-up Volocopter, features 18 electric-powered propellers and room for two passengers. It’s designed to fly at speeds of up to 60 miles an hour over distances of up to 20 miles.

The company hopes to make its air taxi a convenient travel option in Dubai within five years, and then across the world after that. And it promises to be as easy to hail as an Uber. “It will be integrated into your app just as if you’re choosing…a bus or a taxi,” says Florian Reuter, Velocopter’s CEO.

The idea is that once you request a Volocopter, you’ll head to a nearby landing pad to be picked up and whisked to your destination. Ideally, pads will be sprinkled on rooftops and parking lots across cities. A given spot could be reserved for a few minutes while the taxi lands and you climb in. 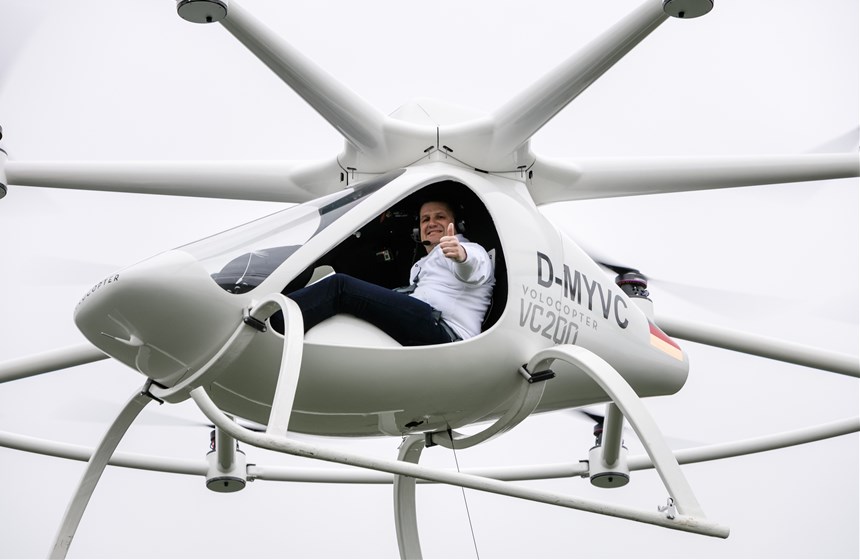 Volocopters are quieter and offer a smoother ride than helicopters, Reuter says. While you sit back and take in the view, the software running the air taxi will offer you a choice of flying styles. “You can actually…say it should fly faster and can do sharp turns, or whether it should be more smooth and more like a luxury limousine rather than a sports car,” Reuter says.

Flying taxis will likely never be cheaper than ground-based transportation. Still, Reuter hopes they will eventually be affordable for most people. “We see this as something that is a available to everyone, not just to a privileged few,” he says.

And Volocopter isn’t the only firm racing to put taxis in the sky. Uber hopes to begin testing air taxis in Dubai (which aims to be a global leader in futuristic technologies of all sorts) and the Dallas-Fort Worth area by 2020. Airbus is also developing air taxis. But before we’re all on board with the whole idea, aviation authorities must consider how numerous taxis can operate within a given area, and how to keep everyone safe as the cabs fly above urban landscapes filled with buildings and people.

The Volocopter’s key components, from propellers to electronics, have backups so if any piece fails the vehicle can still fly, Reuter says. Still, there are concerns that hackers might be able to take control of air taxis, diverting them and possibly causing them to crash, says John Robbins, an associate professor of aeronautical science at Embry-Riddle Aeronautical University in Daytona Beach, Florida.

Being battery-powered limits how long air taxis can stay aloft. And Volocopters wouldn’t fly in poor weather and, as currently configured, can ferry only about 350 pounds.

Robbins isn’t sure how long it will take until air taxis are soaring through cities around the world, but he looks forward to that day. “It would be fantastic to have this type of opportunity, it would be [like] personal helicopter rides every time you went anywhere,” he says.

Eventually, air taxis could ease congestion on the streets below and give people a new perspective on their cities. As Robbins puts it, “I can see them having windows all the way around, and you getting a 360-degree view of the world around you.”