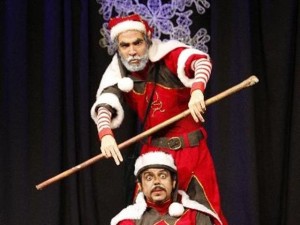 East of the capital, at the Teatro Espressivo, at the Mall of Curridabat Momentum Pinares presents A Christmas Carol by Charles Dickens.

The work presents the always bitter Mr. Scrooge, while visited by three ghosts of Christmas. The assembly has special effects and music.

Moving closer to the central canton of San Jose in San Pedro de Montes de Oca, Skene’s Theatre presents Operation Christmas . This comedy shows as a child begins to stop believing in Christmas, however, one of Santa’s reindeer will do everything possible for her to not lose the magic of believing in fantasy.

This production is presented Sunday at 4 pm, admission ¢ 3000, information in 2234-6294.  Skene Theatre is located behind the Catholic church of San Pedro.

In the newly opened Teatro Flor Urbina, in the heart of Guadalupe, Goicoechea, Sunday will present the musical-theater production of A magical Christmas Fantasy.

The production blends the stories of reindeer Rudolph, famous for its red nose and the Grinch, original writer Theodor Seuss Geisel.

Finally, in downtown San Jose, at the Tricycle Theatre, will feature the play  The Snow Ogre , Sunday at 2 pm

The theme of the play revolves around two elves who get in trouble with Santa, then break him an important piece of your gift factory. So they decide to take a trip to repair their mischief and save Christmas.