A Must Win For Mexico Against Costa Rica

Costa Rica Sports News – It comes down to that only a win, an addition of three points, will make Mexico really happy on Tuesday. There’s a slight chance they will get past Honduras for third place, but only if Honduras loses which of course isn’t up to Mexico. 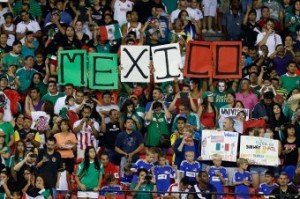 The most probable outcome is that Mexico will sinch 4th place and play New Zealand for a slot in the World Cup 2014. They are determined to win against Costa Rica, explained the team’s new manager. He was proud to see them win against Panama on Friday.

The victory put them three points behind Honduras, meaning Honduras needs to tie or win to get their ticket to Brazil. Mexico’s Oribe Peralta said, “We know that with one point we are in the playoff, but we will go in with the intention of qualifying directly if we get the right result in Honduras. It’s still possible.”

The win over Panama made the team more positive and calm, according to captain Rafael Marquez. The team is no longer dreading missing the World Cup for the first time since 1990. If they struggle against Costa Rica, however, and Panama plays well against the U.S., it could be Panama playing New Zealand to qualify.

Panama is hoping to do better than expected because of the announcement the the U.S. player Landon Donovan will miss the match due to an ankle injury. Jermaine Jones will still be out with his knee injury.

With the U.S. not at 100 percent and Costa Rica really wanting to win over Mexico even though they have already qualified, Panama just might have a shot.

Is it Hard to Make Costa Rican Friends?