There were many things on my bucket list: Learning Spanish, taking surf lessons, climbing a few volcanoes, going white-water rafting, trekking through the jungle, coming face to face with interesting wildlife, diving the blue hole, exploring caves, walking through ancient Mayan temples and tasting unknown dishes. Excited, I exited the arrival-hall with my backpack to look for a taxi to my hostel. 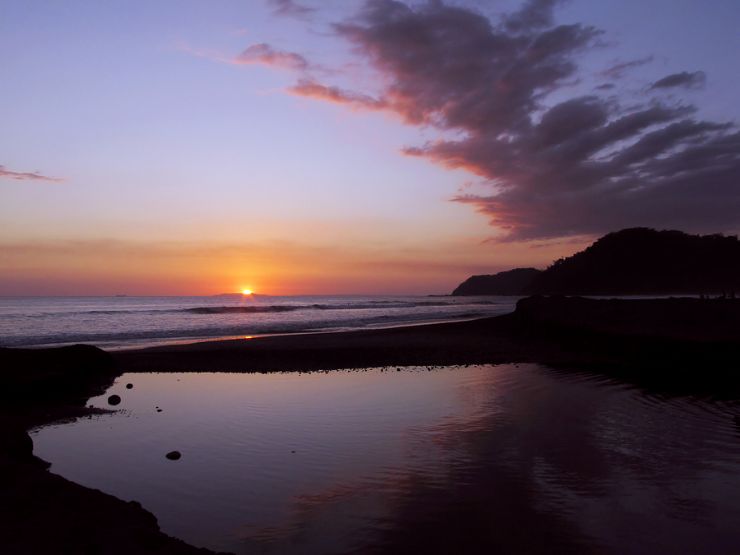 A small mob of taxi-drivers surrounded me as soon as I walked outside. Not liking the pushy attitude before I could get my bearings, I stuck up my hand to each of them: “No gracias.” I had read to look out for the official taxi stand and chauffeurs that would be wearing orange. Spotting them, I walked towards one that was calmly waiting on the side of the building. I gave him the address of my hostel and he guided me to an official metered taxi.

I still had to get some supplies for my long trip; most importantly, some good hiking shoes, so I had decided to book a hostel close to the new mall and by chance also the airport. Within five minutes, I was standing at the doorstep of my accommodation for the night. The hostel, costing about $15 a night, was very cosy. The family that runs it had converted part of their house to accommodate travellers. It was already getting dark, so I got a bottle of wine to celebrate and a simple microwaveable meal at the supermarket nearby. As I sat at the kitchen table, sipping on a glass of wine, I finally got a quiet moment to fully take everything in. Five months… travelling by myself… with only a rough plan… what experiences would I encounter? It felt pretty surreal.

Waking up early the next day, I quickly got myself ready to go to the mall. I had decided that I would shop rapidly as I wanted to make my way to Jaco, a beach-town a few hours away in the afternoon. Two familiar faces were in Jaco – Debby and Astrid, who both live in Sint Maarten.

The mall was huge. Initially, I was distracted by stores like Forever 21 and had to remind myself that I wanted to travel with as little as possible, and cute dresses were not needed to backpack across Central America. Finding a good sports store, I explained in my broken Spanish what I was looking for. Three young store-attendants came to my aid. Although I didn’t understand fully what they were saying, we were quickly laughing about my height and big feet, as I towered over them.

I found everything I needed besides a headlamp. Back at the hostel, I showered and packed up quickly. After a comfortable shuttle-drive of a few hours, I arrived at Room2Board, the surfer-friendly hostel where Debbie and Astrid were staying. Although it was still low season, the hostel was very lively. After being led to my dorm room, I joined Debbie and Astrid at the bar for falafels and a happy-hour drink. Astrid was ecstatic about the area, as the beach, just a few steps away from our hotel, had consistent surfable waves – something our island doesn’t have. She had been able to surf at least twice a day since her arrival.

Playa Hermosa sits just south of Jaco, a famous surfing location, which is the site of the International Quicksilver Championship every year. I noticed quickly that most of the backpackers were here to do just that – surf. But there were also lots of other things to do in the area and as neither Debbie nor I were avid surfers, we decided to follow the recommendation of the bartender and go for a hike nearby to the top of Miro Mountain.

The path to the start of the hike was easy to find. It took us up the hill in an easy incline. Surrounded by jungle, we both looked around vigilantly for sloths, which could be in the area. There were no sloths to be found, but there was a very pretty mural that followed us along the path depicting various animals. I wasn’t sure why animals like rhinos and elephants were on the art-work, as I was pretty sure those didn’t reside in Costa Rica. Despite the illogical imagery (in-my-opinion), it was a nice addition to the scenery.

Pretty soon, we spotted the first lookout point, which looked over the entire Jaco beach. After enjoying the view for a bit, we resumed our hike. At the advice of other hikers we met along the way, we took two left turns and to our surprise ended up on the balcony of an unfinished hotel. We were told the construction had halted just a few years ago, but the jungle had quickly taken over the walls, stairs and floors of the building.

The jungle wasn’t the only thing that had taken over the hotel. Huge graffiti art covered the hotel. We found all kinds of cool and colourful depictions, which kept us entertained for quite a while. As we chilled on the balcony taking photos and drinking water, we noticed we weren’t the only visitors at the hotel. A few white-faced capuchin monkeys were curiously looking at us from the trees.

Commonly seen throughout Costa Rica, the capuchin monkey is widely recognized as the most intelligent “New World” monkey. Capuchins have small, slender bodies covered in brown or black fur. Their faces, necks and chests are typically a white or cream colour, earning them the name “mono cara blanca” (white-faced monkey). It is safe to say that our hike was rewarding.

Back in town for lunch, Debbie took me to a small café that had become her favourite coffee-place since she had arrived. Hungry, I asked the owner what I should have for lunch. He recommended the “Pitaya Bowl” which was made with dragon fruit. I had never tasted dragon fruit before, so I was completely surprised by how purple my dish was! After lunch and some shopping, we were just in time to see the sunset as Astrid surfed on the beach.

We mostly relaxed the next day as the rain poured down on Jaco and the surrounding area. Until November, it would be “rainy season” in Costa Rica, which meant many heavy showers and occasional dark-grey days. The sun was out again the following day, my last in Jaco, so Debbie and I got up 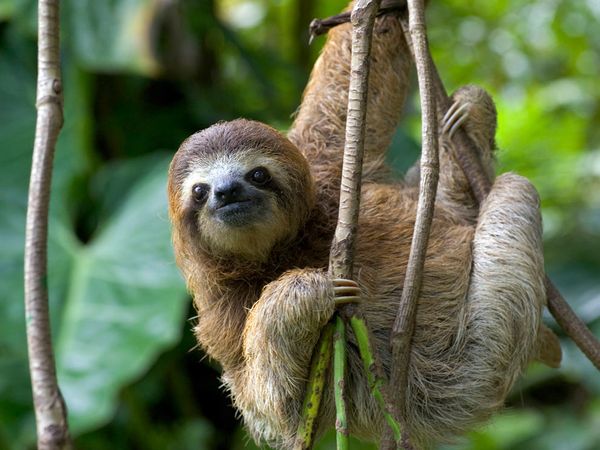 bright and early to take the bus to Manuel Antonio National Park, which was about two hours away. In 2011, Forbes listed Manuel Antonio among the world’s 12 most beautiful national parks. It was also said that you were basically guaranteed to see a sloth – Debbie and I were determined to see sloths!

Our wish was granted quicker than we had hoped. Within 10 minutes of entering the park, we stumbled upon a private tour. The guide with a telescope in hand pointed up to the top branches of a large tree where the “perezoso” was hanging upside down. Sloths are especially unique in that they spend nearly their entire lives hanging upside down in a tree. They sleep, eat, mate and even give birth upside down!

Costa Rica is home to two species of sloth, the brown-throated three-toed sloth and Hoffmann’s two-toed sloth. Black eye patches and “smiling” mouths distinguish Costa Rica’s docile three-toed sloth, which we happily stared at. The guide was kind enough to let us look through the telescope and take a proper picture.

Sloths are highly adapted to living in the treetops; their long claws provide a tenacious grip to the slightest of branches. They sleep an average of 14 to 18 hours per day. Their name “perezoso”, which also means lazy, refers to their sluggish nature. But they are not really lazy as they are at the mercy of their incredibly slow digestive tracts. While most herbivores process food in mere hours, it can take more than four weeks for a sloth to digest one leaf, so it needs all the energy it can get. This also means that on average, they only relieve themselves once a week!

Seeing this one sloth had already made our day perfect, but as if that weren’t enough, we saw two more on the way! On our short visit to the park, we also saw some gorgeous beaches, lots of monkeys, a cheeky coati (sort of raccoon) and a few other interesting animals.

It had been a short but a highly enjoyable visit to Jaco. It was a bit strange saying goodbye to Astrid and Debbie. I had enjoyed their company as it lessened the reality that I was here to travel by myself through Central America. My next stop would be Puerto Viejo, a charming town on the Caribbean coast of Costa Rica, where I’d be taking Spanish classes for a week.

By Laura Bijnsdorp From The Daily Herald

Shipping a Vehicle to Costa Rica; “To Ship a Car or Not” That is the Question

What Are Going to Be the Big Trade Items Between Costa Rica & South Korea?