A Divine History of Potatoes

If there is one thing that is very comforting to my soul, it is eating potatoes. I know many times where a nice bowl of potatoes would warm me up. I like sweet potatoes in the fall, mashed potatoes, potato soup, baked potatoes, french fries in summer and potato salad. I love potatoes in burritos, pie, and just simple. 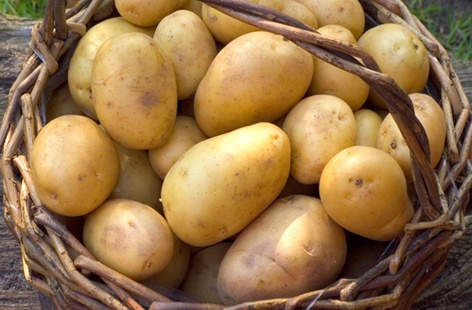 I remember being really broke when I was younger and only having a few dollars left after I payed my bills. Luckily, I could buy a bag of white potatoes for a dollar or two. So, I would eat that with some salt and a bit of butter. It’s amazing how long I survived like that. Even after all that, I’m still obsessed. There is nothing like a hot potato to cheer your body and soul up.

This has me thinking and wondering on all the magical properties of potatoes. Surely, you may yourself have this obsession as well as I do and are wondering as I am, just why potatoes are so yummy and comforting? So, then where does all the mystery and temptation come from?

Potato History
The Incans in Peru are credited with the first popularized potato harvest. This is said to have been noted as early as 8,000 B.C. Since then, the potato has made a worldwide journey; originally a favorite of the Spanish, it began to grow into a bigger crop. Then, eventually the potato came around to Europe where It was exported and brought to America eventually, where it continues to be a popular food choice to this day. Since the potato has been a highly impactful crop to many cultures, there is many prayers that have been recited over it.

Many people have also lost their lives due to a potato disease which took out most crops of which families were dependent upon. It is estimated in Ireland, that during the 1840’s famine, one million Irish lost their lives, causing another million to migrate or to starve. The potato is a very important and powerful gift from the Gods and we must not forget it lest we lose it forever. There is estimated to be thousands of potato varieties. The potato changed the lives of millions of people. What power does it hold?

Axomamma
She is the Incan goddess of the potato. She is said to be the daughter of the Earth mother herself, Pachamama, which would make a lot of sense, knowing that potatoes come directly from the ground.
Pachamama is also the mother to the sun and moon. She is one of the oldest known to be directly associated with the potato goddess.
Axomamma is a lucky being and it is very good to be visited in your dreams by her as that means she is protective over you and your ancestors. Just imagine all the times that people prayed to her to ensure the potato was successful and she multiplied this seed for you.

Potato Dreams
Potatoes come from the dirt. So, the times that you imagine yourself digging in the ground, perhaps it is something in your DNA structuring leading you to think you have to dig for food or sustenance? I am not sure but I do have dreams where I am digging into the ground.

Dreams can mean so much to us and something not as important to someone else. That is because we hold the keys to our dreams and we know what they are worth. You are truly in possession of the greatest gift bestowed to any here; life. That is your connection to the other side, when you dream. Just know that whatever researches you may find, form your own conclusions because that is the opinion that matters the most, is your own on this subject.

If you dream of potatoes it is mostly a sign of divine good luck. It denotes happiness, abundance and spiritual well-being. Most of these dreams should be interpreted with the utmost respect and meaning. A deep analysis is in order to understand this as potatoes are ancient seeds of the past that surely trigger our bodies with psychic instincts, tastes and instructions on survival.

For me, the potato means life, joy and comfort. I hope that you too can appreciate this wonderful gift and essence while you eat it. What would life be like without the potato? It’s hard for someone like me to imagine that.