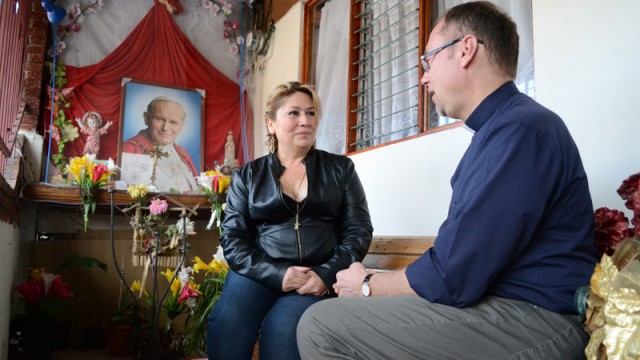 Cartago just had a very special visitor, the Polish Monsignor Slawomir Oder. He was there to meet Floribeth Mora. He also enjoyed some Creole rice n beans. He took all day Saturday to speak with Mora and record the testimony of her miracle.

Joining him was a press team from the Vatican. They were making a video that will be part of a documentary about the streets of Rome before the canonization of John Paul II.

Two years ago, when the Polish priest was in office, he received numerous letters from around the world, all narrating the intercession of John Paul II in them. He said of Mora’s letter, “The case touched me. I saw this woman is a humble person who never sought the limelight with her testimony. A woman with heart. She prayed and received God’s healing through the intercession of Saint John Paul II.”

Floribeth was told there was no cure for her and that she should say goodbye to family. “I cried desperately,” she said, “in my bed because I was afraid to die and leave my children alone.” She was then miraculously cured of a brain aneurysm. Science can’t explain it. She remembers waking up to the voice of the saint. “It was a miracle. The images speak for themselves and the aneurysm disappeared,” she explained.

8 Year Old Reminds Us There is Good in the World

What to Do if You Are Robbed in Costa Rica (Audio)