Costa Rica News – All around the beaches and towns of Costa Rica there are big brown eyes looking at you desperately for a crumb of attention. They just sit there staring at you as you walk past. Usually, they look well fed and happy for the most part…but the truth is that they don’t have homes. 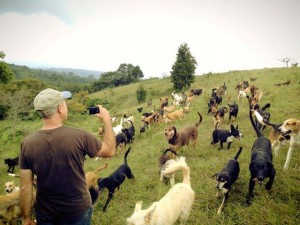 I am, of course, talking about the stray dogs of Costa Rica. The ones around the beach and the small villages appear not to be skinny and timid like the strays in other countries I have visited, but these dogs go about their business and have chunky little bellies and their coats seem to be healthy. Most have taken refuge around small towns where they feel safe and they are so street savvy that they actually know when to cross the street without getting hit by a car. Their local name is zaguate which can mean simply mutt, or street dog.

There are estimated to be over 1 million zaguates roaming the streets of Costa Rica. The government organization SENASA that deals with livestock and some domestic animal cases is similar to the United States Veterinarians Office. Most issues are dealt with keeping slaughterhouses as humane as possible, and also functions to increase and enforce animal protection laws. However, the lack of funding and resources has pushed care of zaguates into the hands of private organizations. One such organization is on Facebook. The name is Territorios de Zaguates. They have land areas to house these dogs and also an adoption center right on their Facebook page. If you are interested, go check them out. Some of the dogs are adorable!

All around the beaches and towns of Costa Rica there are big brown eyes looking at you desperately for a crumb of attention. They just sit there staring at you as you walk past. Usually, they look well fed and happy for the most part…but these guys don’t want to go home.

I am of course, talking about some of the men of Costa Rica. They sit and stare at all the women that walk by, whistling, cat calling, and making comments in Spanish and English about a woman’s beauty or her body. These men would love to take a woman home; I don’t think they are very discriminating either. They usually have a 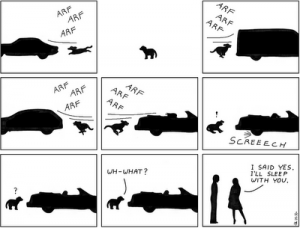 wife at home and a couple of girlfriends on the side. I won’t leave out the many legitimate and illegitimate children that they are populating society with. Spreading their seed is a seemingly important matter with these men. Their local name is zaguate which means simply, man-whore.

Getting zaguates to pay for these illegitimate children in Costa Rica has been difficult. There is a new law, which came into effect March 2001, and is believed to be the first of its kind in the world. The mother names who the father is in the birthing room and he is asked to take a simple DNA test, if he does not agree, he is assumed to be the father, with the duty to pay child support. The tests are free and are legally binding. This new law contradicts the paternity determination that is still currently used in Western countries. In most countries, paternity is determined by drawn out court meetings which can cost people thousands of dollars. Most of these women can’t afford to take the alleged fathers to court, and that is what the zaguates counted on. However, since its inception last year, more than 8,000 Costa Rican women have taken advantage of the new law. So far, the number of newborns whose fathers’ names are not declared in the country’s civil registry has dropped from 30% to about 10%. The government lab has begun taking blood samples from couples and children, and initial results show that women named the wrong men in 10% of cases. If you see a zaguate, run, don’t walk, otherwise you too could be in need of the new law! By all means, don’t adopt one and take him home!