Well to show the corruptness again of the Costa Rican government, it seems that as long as you are unethical and get business for governmental entities then it is ok with the President.  Honestly at this point I think that an impeachment should be called for but it is not going to happen because all of the diplomats and congressmen and women are making a fortune with the idiota Laura Chinchilla in office. The government has no direction and its only goal is to line its pockets before the next election. 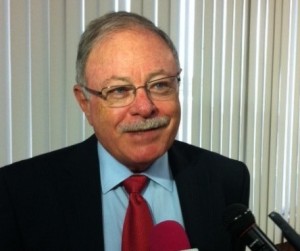 About 95% of people aware of the case on the letters of recommendation from Luis Liberman and Leonardo Garnier, second vice president and minister of Education, respectively, believes that President Laura Chinchilla should punish them or ask them to resign.

Only 2% agree with the decision made by the president: Do not apply any punishment..

In this case, the error margin is 4.3 percentage points upwards or downwards.

In early April, it was reported that Liberman and Garnier signed letters of recommendation, in August 2011 – a company of the then presidential adviser, Florisabel Rodriguez, who used them to compete for a consultancy contract to image, from ¢ 17 million, which was won by the Costa Rican Oil Refinery (Recope).

In June, the Office of Ethics concluded that Lieberman and Leonardo Garnier violated ethical principles of integrity, impartiality, fairness and objectivity to sign cards for the Process Research and Consulting company.

However, Chinchilla issued two rulings that exonerated the hierarchy. Supported by a legal report of the Presidential House, she concluded that there were no grounds to open a process Garnier “by sticking its actions to the legality and ethics.”

Furthermore, if Liberman filed “because the law does not provide penalties for such officials (vice president) and his behavior was attached to the legality and ethics.”

Both Lieberman and Garnier rejected the conclusions of the report by the Inspector. They have argued that in writing the letters, did not influence the hiring process.

43% of respondents said they were aware of the case and the judgment as to the letters. Another 54% said not to hear the case.

On the advice of the Attorney General, Unimer also were asked if they felt well informed founded. 50% said yes and 38% said no.

Chinchilla’s refusal to sanction the two hierarchs earned him a temporary blockage of the legislative agenda by the opposition parties demanding a drastic reaction to the leaders.

When respondents were asked whether they agreed with blocking legislation to require the departure of Liberman and Garnier, the criteria were divided.

Why Your Dog Stinks