9 Gemstones For Your Heart, Mind & Soul

Gemstones are about changing energy into something beautiful that takes millions of years sometimes to form completely. They represent spiritual transformation and enlightenment. A gemstone starts out as simple matter and energy soon manipulates into pieces of our material world.

The world works very efficiently. Everything seems to serve some sort of purpose. We have harvested many precious minerals and effectively used them in a number of ways including in technology, medicine and science.

Somethings of this nature of primordial power have properties that we cannot yet understand because we were not in existence during some formations. What was the original intention and use for these beautiful gemstones?

Let us feel the unique vibrations and patterns of each piece of the Earth and evolve spiritually as this simple thing that was formed from a void of nothingness has like us. Let us wear each piece of energy as armor for our hearts, minds and souls. In this way, we can better become spiritual warriors and change ourselves into stronger people.

Keep in mind that some stones are altered and some minerals can cause severe allergic reactions. I myself cannot touch Hematite, a metallic material from the Earth, as my hands swell and turn purple and blue and toxins seep through my skin into my bloodstream. Chemically treated stones and synthetic can easily be passed off for the real deal. This all pertains to different elemental associations. A natural stone has better Earth magic than a synthetic that would have more of an airy elemental property, depending on the composition and structuring.

However, in order to promote quality I would rather stick to purity over science but sometimes science can create beauty as well that is undeniable.

I chose nine gemstones because nine represents the three worlds of the heart mind and soul. Nine is the number that represents angels, immortality, totality and eternity. It is three by three times. It is a state of spiritual perfection, pregnancy completion, and meditation.

Agate-
This beautiful stone is formed through many layers of time. An agate starts in a hollowed out cavity in a cliff or rocky place. From there, gas emissions from lava, weather changes and time bond together to create hard formations of multicolor energy.

There are many specific variations of this mineral all with a unique birthplace. Agates can be found all over the world. The first popular birthplace is thought to be the Achates River in Sicily, which is now known as Dirillo. The name had originally come from the findings of agates within its reaches but was renamed under new rule. Today, this stone may still be found here.

Many different types of this stone each hold their unique powers. I find personally, that placing an agate underneath my pillow during a full moon while I dream seems to bring on strong visions and dreams.
Commonly, agates are thought to balance energies of positive and negative influence for a stimulating mixture of spiritual and mental stabilization. 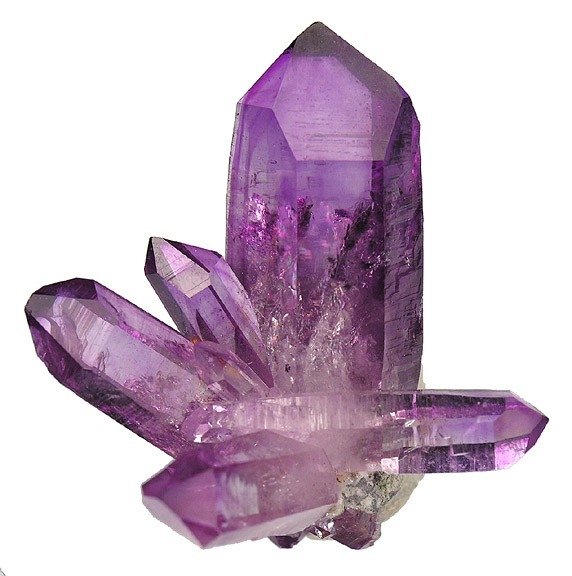 Amethyst-
This gorgeous variety of quartz is by far one of the most beautiful in appearance. This stone forms naturally in dark, rocky places through an astonishing amount of time. Illumination, and iron impurities lend their attaining to form dark, unique coloring to each crystal.

Amethyst fades harshly in direct sunlight and should not be placed in windowsills. When placed underneath different lights, Amethyst quickly changes shades. To recharge your amethyst, keep tucked into cool dark places.

Amethyst can help enhance your psychic powers, purifies its surroundings and promotes sobriety. Wear amethyst at night in jewelry. You can use crystal clusters to meditate with or put around your house to feel its power. Amethyst is thought to emit negative ions into the atmosphere.

Black Onyx-
This gemstone is a part of the Quartz family. It is formed in the vesicles of volcano lava. It is naturally a mixed black color featuring alternating parallel bands of different color variations. The translation of the word in Greece is “claw.” Black Onyx is commonly believed to protect the wearer from supernatural harm and negative energy.

Celestite-
Celestite is a type of sky blue quartz. It is formed from alkaline Earth mineral called strontium. What is interesting is that when this mineral is exposed to air, it turns yellow. The color yellow is used to symbolize air in many Pagan or Wiccan rituals.

This gemstone is a good one to have around to heighten abilities to commune between the world of angelic beings and our own. It opens up connections to higher realms and promotes beauty. It represents the soul on this level.

Crystal-
Crystals come in many different variations. These are all variations of Quartz. Clear crystal quartz can have many shapes. Wearing a crystal is like wearing an invisible robe around your aura that nobody can see because it is translucent. Prisms and rainbows form naturally through the design of this rock.

A crystal is a good tool to use for cleansing your spirit by visualizing bathing yourself in this rainbow light or actually putting it into the sunlight and doing it. A crystal is a representation of the ice in clouds as it reacts much the same way! Its energy is meant for full sunlight but may also be recharged in darkness and cold with salt.

Quartz is a scientific and metaphysical energy conductor. It can be used in a variety of ways. 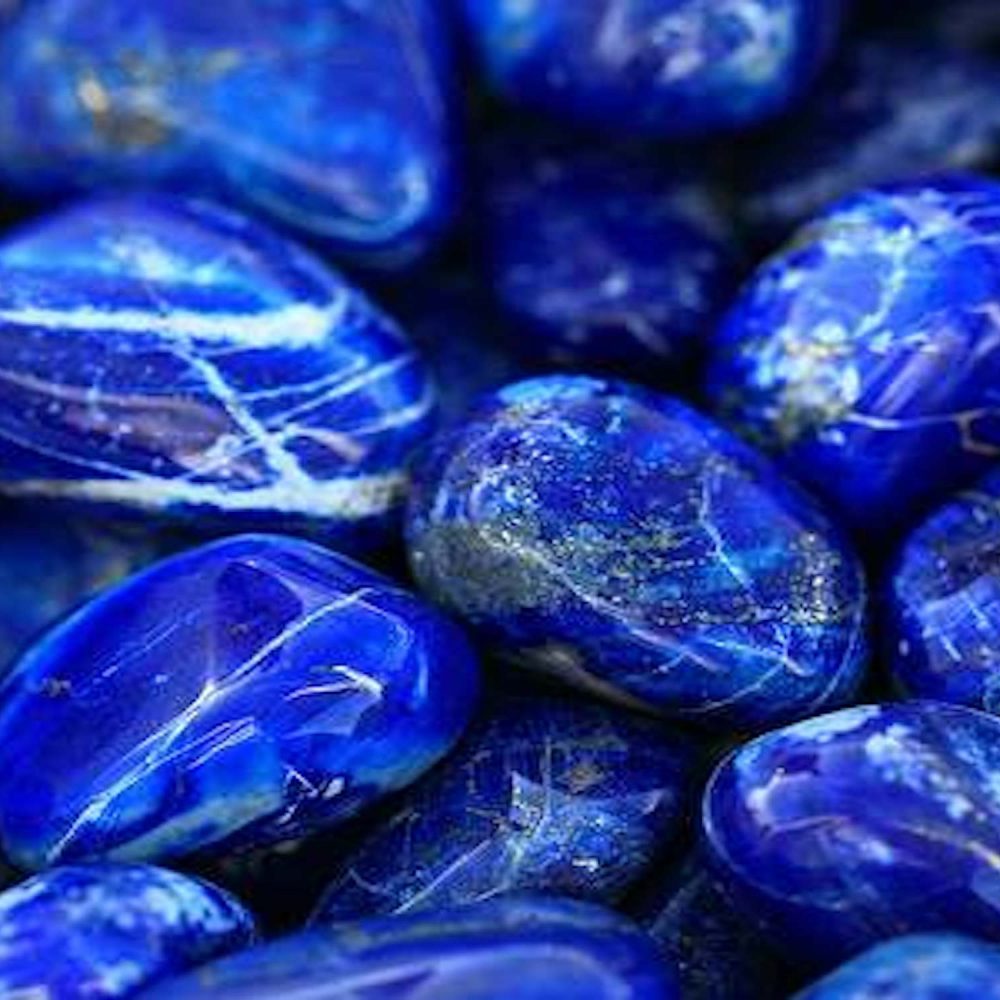 Just a tiny piece of this potent blue stone has caused me to have powerful visions amplified by submersions of water. The color is also described as Ultramarine. Blue is the color of the heavens, the skies, spirituality and water. Blue is the peaceful divinity, the all-knowing, the symbol of the primordial Gods. In popular ancient religious art, lapis lazuli is almost always used to represent this.

Moonstone-
Moonstone is a milky stone, clearer in its best quality. Moonstone works much the way quartz does and tiny prisms can be seen inside when rain is approaching. Wear Moonstone for a balance of emotion and power. Use this stone to represent lunar goddess, an angel or night rainbows. I personally find moonstone to work best for me when worn during stormy weathers. I believe it recharges in this way.

Rose Quartz-
Rose Quartz is a variety of quartz and is great for protecting the heart. The one color of a prism that does not show is pink. This is why I recommend having this shade of quartz in addition to translucent quartz crystal. It is a perfect stone to wear as a necklace right over your heart and will keep you emotionally guarded.

Sardonyx-
Sardonyx is another variety of onyx. Sardonyx has bands of red, yellow and orange and is the counterpart to black onyx. This stone when used I conjunction with Lapis Lazuli increases both abilities immensely especially underwater.

Sardonyx is said to emit energy that causes happiness and optimism. This is the perfect stone to have for anyone seeking a brighter future.

Happiness is acquired in many different ways and this stone can be like a magnet for that.

Here are some gemstones dreams that I have had; Wednesday, February 18th 2015 Chunk of Amethyst I dreamed that I was wearing a big chunk of raw amethyst around my neck.

It was on a gold chain, it was about 18 inches. It was so beautiful that I just lusted for it. The outside of the Amethyst was dyed red.

Below it I was wearing a gold key, lower on my neck on a 24 inch gold chain.

Cirque du Soleil About Ready to Begin in Costa Rica