Bank of Spain data for this past month compares this to 5.4 billion Euros coming ‘into’ the country for this same period last year. Following Greece, Spain is the next country expected to crash economically, led primarily by its busted real estate boom. Its banks have been bleeding money on housing loan losses and the holder of the most toxic debt,  Bankia, has been an unmitigated failure. 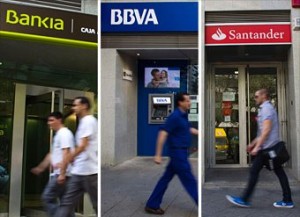 Bankia was a government approved scheme to merge seven exposed savings banks in order to try and mitigate their individual bad debt. The new entity became the fourth largest financial institution in Spain but carried the largest percentage of real estate debt in the country. The Spanish government predictably took over Bankia on May 10th of this year and suspended trading of shares on May 25th.

As was expected the European Commission on Wednesday offered direct aid from a shady Euro Zone rescue fund (an ECB fund in which current funds nor their distribution to help national central banks are not normally advertized in advance) to recapitalize Spanish banks with the aim of giving the government more time to fix its budget deficit.

Spaniards are rightly worried about the health of their banks and have been sending money to deposit accounts in stronger economies of northern Europe and elsewhere.

The European Commission is requiring that Spain explain its restructuring plans for Bankia and its other troubled banks as well as come up with a solution for repairing financial problems within its 17 main autonomous regional governments. A European Commission spokesman was quoted as saying, “A domestic solution to the country’s bank crisis would be better than a European rescue.”

The Spanish problem is contributing to problems with the Euro as it continues to fall against the Dollar (around $1.24 at the moment).

According to Ortega The New Narco Road