World Entertainment News – The 80’s live on in Costa Rica and they live on in Vegas.  Iconic ‘80s metal band Mötley Crüe has settled into the Hard Rock Hotel & Casino in Las Vegas for an exclusive engagement at the Joint, playing 12 shows through October 6. But bass player Nikki Sixx told FOX411 things got really heated during one rehearsal. 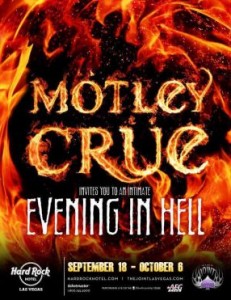 “We were in production rehearsal when the band basically had to jump off the stage because the fire was so out of control,” Sixx said about preparing for their Vegas gig, dubbed appropriately enough, ‘An Intimate Evening in Hell.’ “Tommy (Lee) had to, like, jump off the drums. It’s a work in progress, and unfortunately, sometimes when you play with fire, you’re going to get burned.”

Hopefully not literally burned. “(The fire) is very controlled – I’m talking about the actual heat and the containment of being on a stage,” Sixx clarified. “It’s all at us – the building could never catch on fire. It’s very protected. Everything is very safe in that way, but the direct heat on the band members – it’s hot!”

Lead singer Vince Neil concurred, telling the Las Vegas Sun: “It’s more than any rock group has ever produced or attempted. It really is entering the depths of hell. There’s fire all around and fire coming down from above. There’s no question this is the most dangerous theatrics ever created and far more than anything we expected. But, hey, this is Vegas, and we do bigger, bolder, badder, sleazier here better than any other place on Earth.”

Neil’s not kidding. The entire hotel and casino has been Crüe’d out for their residency. “We’ve made the Hard Rock their home,” Bobby Reynolds, Vice President of Booking for AEG Live, told us: “It’s not just the show – it’s the entire atmosphere.”

“You’re never going to see this show again,” added Sixx. “These 12 shows are only for these 12 shows. You can come and see us and it’s just a great place to hang and be involved in the whole Mötley Crüe experience. We have food named after us, drinks, in the casino they’re slamming our music, we’re on poker chips – we’re all over the place. We’re hoping to give the fans that ultimate experience. Growing up, if I could have gone to an event like this for the Rolling Stones, I would have loved it – it would have been a blast.”

The Crüe’s nightly set includes a sampling from almost every era of the band’s 30+ year career. “This time around, I’m really loving playing ‘Red Hot’ off our second record – we haven’t played that in a long time,” explained Sixx. “I always love playing ‘Live Wire.’ Really enjoy playing ‘Too Young to Fall in Love,’ which was an early, early hit for us. So, I enjoy the new stuff – I love our new stuff, I love the old stuff – all mixed together.”

Sixx – along with Neil, Lee and guitarist Mick Mars, have all settled into suites at the Hard Rock, but don’t expect any stereotypical rock n’ roll debauchery. “I’ve hit my quota of throwing television sets out of hotel windows,” laughed the 54-year-old. “I have to find something new to do.”

During his first few days at the hotel, Sixx has had a few close encounters with Crüe fans. “It’s a little hard to leave the room, because everyone’s there to hang out and see the band, so you go wandering through the casino and it turns into quite a thing,” said Sixx. “But it’s awesome, it’s cool, we’re having a good time.”

Mötley Crüe might even be called something of a family affair these days. “We’re a very unique band in the sense that our original fans are still with us, while we have multiple generations of new fans,” Sixx noted. “I see fans from anywhere from in their 40s to their teens in the audience and in the lobby. A lot of times – and this was similar to my experience seeing the Rolling Stones 15 years ago – I see families together. You see the whole family, the teenagers, the dads, they’re all rockin’ out to their favorite songs.”

And Sixx’s free time during his two weeks in Vegas may be more mild than wild. “I have my fiancee, (Courtney Bingham), and my kids coming out, and my dog,” he explained. “Sorry to disappoint, but my past is my past. I keep the insanity on stage these days. I wouldn’t say that I’m neutered, but maybe slightly trained.”

Sixx’s golden retriever, Lecia, isn’t exactly what’d you call a heavy metal dog. “He’s not very keen on the volume, so he just stays in the dressing room.”

While Sixx may be somewhat domesticated these days, he admits that he and the Crüe still have their diva moments. “Well, there’s always rock star drama,” he laughed.