60% of Costa Rica is Prone to Landslides

Costa Rica News – This is not good during the time when it will start raining close to all day in Costa Rica. 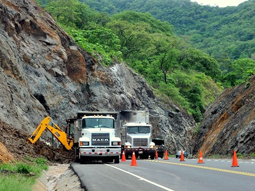 The geologists from the National Emergency Commission bring us some alarming news, 60% of Costa Rica is prone to landslides.

Especially with the October and November rains, we are facing disasters. About two weeks ago, the route from San Jose to Limon had 40 landslides after heavy rain, leaving 1,200 people stranded.

The areas at risk are too many to name, but some of the ones most at risk are El Burío, Tapezco, Chitaría, Cascabela, Calle Lajas, Coronado, the northern part of Montes de Oca, La Carpintera, Turrialba, Pérez Zeledón, and Routes 32, 1, 2, and 27.

This is a problem faced by Costa Ricans every year, as it is a mountainous country. Residents of Santa Ana had to evacuate two years ago after mud from Cerro Chitaría filled their houses.

The MOPT has a department dedicated to emergencies and they have machinery to deal with landslides and mudslides.