Johannesburg (AFP). Some sixty miners are locked underground in a platinum mine in Zvishavane in southern Zimbabwe, said the miners’ union. “A conveyor belt was broken and triggered a fire, leaving initially trapped underground about 85 miners,” he told AFP Shadreck Polowelo, president of the union miners. 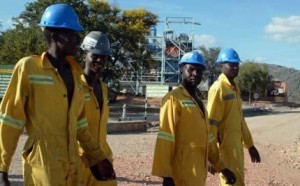 “Twenty miners have been  rescued and the rescue work continues. I go to mine and to see what happens,” he said Polowelo.

The company Aquarius Platinum Ltd, owns 50% of the mine, for his part said that “the fire had been contained,” but that “due to a problem of visibility, 75 employees had been sent to a protected in an area of ​​refuge.”

“They are currently being lifted to the surface. And this process might be completed in the afternoon,” said a statement from Aquarius Platinum, adding that there were no missing miners and non had been  injured.

The Mimosa mine is located about 390 km south of Harare, the capital of Zimbabwe.