World News – There is going to be an upheaval about this incident for gun control and the fact that this would not have happened if stricter gun control laws were in place. 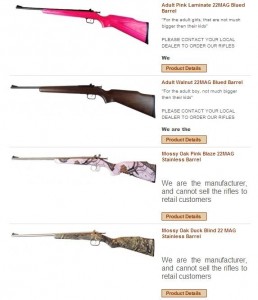 Why don’t we be honest…..this is directly the fault of the parents.  Yes I have remorse for this 2 year old child that was killed in this incident but dear god, who is the hell gives their 5 year old a gun and then leaves them alone to play with it around their 2 year old.

A Kentucky toddler was accidentally shot dead by her own brother as he played with a gun he’d been given as a gift, police said.

Caroline Starks, 2, was killed after her 5-year-old sibling fired the .22-caliber rifle at their Burkesville home.

She was rushed to Cumberland County Hospital but pronounced dead.

The Lexington Herald-Leader reports the weapon — a Crickett branded by makers Keystone Sporting Arms as “My First Rifle” — was given to the boy last year.

Promotional material on KSA’s website says the gun aims to “instill safety in the minds of youth shooters.”

Cumberland County Coroner Gary White said the family had not realized a shell was left inside the gun, which was kept in a corner of the house.

The pair’s mom was at home when the shot was fired, he added.

Revealing the shooting would be ruled accidental, White added: “It’s just one of those crazy accidents.”

Yes the shooting was accidental, but it is purely the fault of the parents not checking the weapon for ammo before letting their child play with it.

Quick advice to all of those people that have limited to no brain function……supervise your child if you place a gun in their hands…….especially a 5 year old.  You would think this would be common sense but with the dumbing down on the world in general perhaps not.