400 Missing From Capsized Boat in China 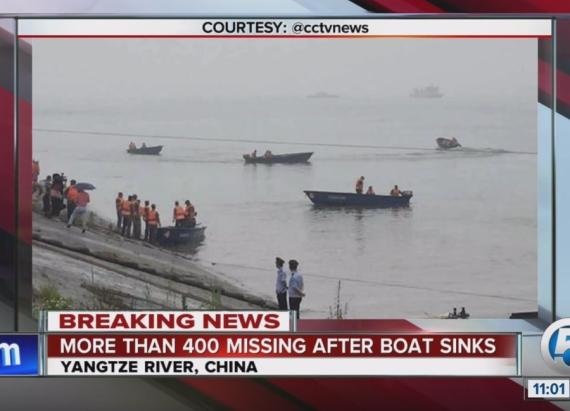 More than a dozen survivors were rescued from the four-decked Dongfangzhixing (meaning Eastern Star), including a 65-year-old woman pulled from under the hull Tuesday, the official Xinhua news agency reported.

Five people were confirmed to have died in the incident after their bodies were found by officials. Many of the passengers were elderly tourists.

Rescuers who climbed on the hull of the partially submerged vessel reported hearing people calling for help around 12 hours after it overturned at 9:38 p.m. local time (9:38 a.m. ET Monday), CCTV news said.

State TV showed dramatic footage of rescuers trying to cut through the ship’s upturned hull with an angle grinder. One emergency worker tapped on the hull with a hammer and listened for a response, then gestured downward.

The captain and chief engineer of the ship said after being rescued that the ship had run into difficulty after being caught in a cyclone, according to Xinhua.

Chinese Premier Li Keqiang called for “all-out efforts” to save lives, according to China’s state-run television station CCTV. Li was also pictured at the scene by Xinhua on Tuesday, giving “instructions on search and rescue work” and accompanied by other officials.

The tourist ship was traveling on the Yangtze — the world’s third-longest river behind the Nile and the Amazon.

It started in the eastern city of Nanjing and was scheduled end up in the Chongqing region in central China. It sank about 110 miles west of the Hubei provincial capital of Wuhan. The river is about 50 feet deep in the area.

Wang Yangsheng, senior official with the Yueyang Maritime Rescue Center, told the China Daily newspaper that the incident happened, “so fast that the captain did not even have the time to send out a distress signal.”

The rescue center received an alarm call after another boat saw two people in the water. It sent a patrol boat and found the pair, one of whom said he was the captain.

More than 50 boats and 3,000 people were involved in search efforts. The ship’s captain and the chief engineer were detained by police for questioning, Xinhua said.

Friends and relatives of some of those on board scuffled with officials in Shanghai on Tuesday, angry at what they said had been a lack of information about the fate of their loved ones.

Zhang, whose brother and wife were on the boat, was one of the 60 people who gathered at the travel agent but found it to be locked. They were then ushered into a room at a nearby local government building and scuffles broke out after they demanded more answers from officials.

An official at the Shanghai government’s media office declined to comment when contacted by Reuters.

Before that, the country’s worst ever shipping disaster was the sinking of the Taiping, a steamer carrying refugees from Shanghai to Taiwan in 1949 during the second Chinese Civil War.

The ship was severely overloaded and had switched off its lights to avoid a curfew. It collided with another vessel and sank, killing between 1,000 and 1,500 people according to some estimates.

Dancing with the Music in Costa Rica

A Ghost in the Land of Myth and Magic; Guatemala