World News – An elderly Colombian woman was stunned when she went to the doctor for pelvic pain and was told the pain was caused by a 40-year-old “stone” fetus.The 82-year-old had been carrying the calcified four-pound fetus called a lithopedion for decades without realizing it, according to the Telegraph. 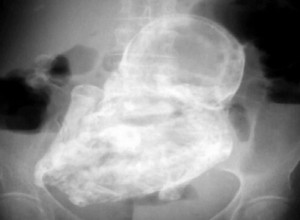 Doctors only discovered the rare medical phenomenon after ordering an X-ray that revealed the lithopedion, also called a “stone baby.” The woman is now expected to undergo surgery to remove it.

Dr. Kim Garcsi, who directs the ob/gyn clerkship program at University Hospitals Case Medical Center in Cleveland, said the condition is so rare it has only been recorded approximately 300 times in medical literature.

Garcsi, who did not treat the Colombian woman, says the lithopedion is created when a pregnancy forms in the abdomen rather than in the uterus. When the pregnancy ultimately fails, usually because the fetus does not have enough blood supply, there is no way for the body to expel the fetus.

As a result, the body turns the fetus to “stone,” using the same immune process that protects the body from any foreign object detected in a person’s system. Garcsi said it may seem odd, but that the process is used constantly in the body to stay healthy.

“When you get old cartilage in the knee, it calcifies,” Garcsi explains. The calcification of the tissue protects the mother from infection, but also means the “stone” baby can remain in the abdomen undetected for decades.

“Most of the time people find these and [sometimes] even after they’re found and don’t do anything about it because they’re totally asymptomatic,” said Garcsi.

The rate of an abdominal pregnancy is about 1 in 10,000 pregnancies; however, Garcsi said modern medical care usually identifies any issues that would lead to a lithopedion before the “stone” baby can form.

Only in Costa Rica for Week of December 16th