Costa Rica News – In a lot of places around the world Black Friday is a day where all prices are reduced to support the beginning of the materialistic shopping season for Christmas.  Costa Rica is trying to seduce as many people as possible to give them their money instead of spending it on gifts. 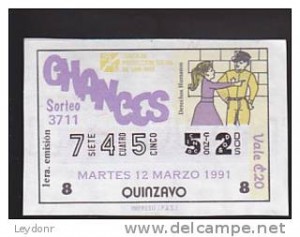 Ok here is the thing everyone. The lottery is like wiping your ass with your money and then throwing it in the toilet.  Yes one person might take home this prize but it will most likely not be you.

Lottery is a huge addiction to many Costa Ricans as well as many other places in the world.  It is relying on luck instead of putting in hard work. Most of the people that play the lottery really cannot afford playing either.

If you want to throw your money away though, here are the details.

A prize of $230,000 will seduce those who dare to play the Super Special Sweepstakes ‘black Friday’ Popular Lottery, known as Chances.

The drawing will be held on November 23 and in total, the drawing provides for the delivery of prizes ¢ 899.5 million.

“The product enjoyed high acceptance in 2011 and we are confident that this year will see the same phenomenon in sales, as it is an excellent reward for a minimum price,” said Francisco Ibarra, CEO of JPS.

In addition, this year, for the first time included a fourth prize of $20,000.

Only in Costa Rica for Week of Nov 12th