2014 Solar Eclipse Will Transform Sun Into ‘Ring Of Fire’

World News – The sun will look like a ring of fire above some remote parts of the world next Tuesday (April 29) during a solar eclipse, but most people around the world won’t get a chance to see it. 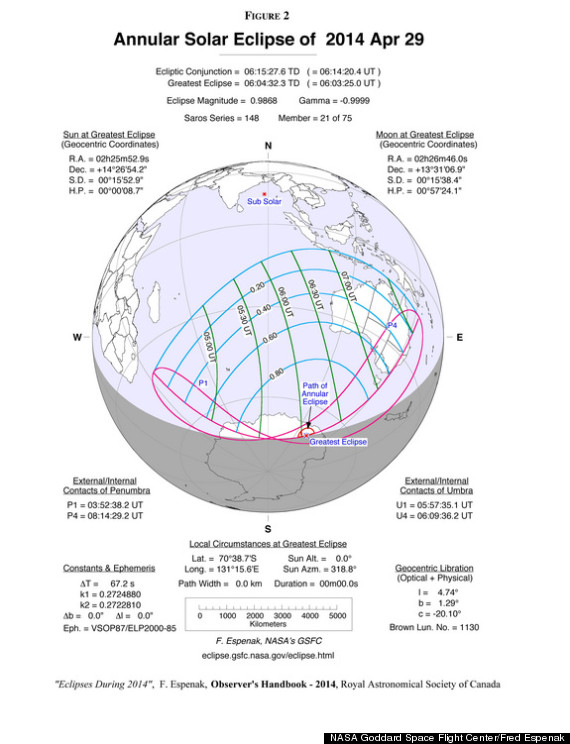 Tuesday’s solar eclipse is known as an “annular” — rather than “total” — lunar eclipse. That’s because Tuesday’s eclipse will occur when the moon is close to its farthest distance from the Earth, making it too small to cover the sun completely. The resulting effect looks like a ring of fire, called an “annulus,” appears around the silhouette of the moon.

But most people won’t see the whole eclipse. The only place in the world where this annular eclipse will be visible is a small area in Antarctica. However, partial phases of the eclipse will be visible in other places. Most of those areas are in the ocean — rarely traveled ocean, in fact — but the entire continent of Australia will get a good view.

The farther north you go in Australia, the less the moon will cover the sun. In Sydney, the eclipse will begin at 4:14 p.m. and will be at maximum — 52 percent covered — at 5:15 p.m. The sun will set in eclipse two minutes later.

WARNING: Never look directly at the sun during an eclipse with a telescope or your unaided eye; severe 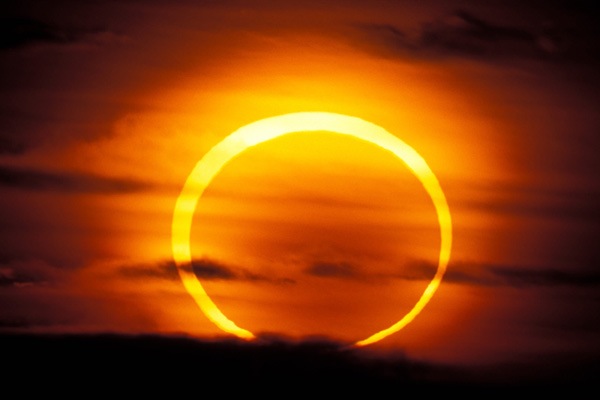 eye damage can result. (Scientists use special filters to safely view the sun.)

Partial solar eclipses have the greatest potential for eye damage because at no time is the sun completely covered by the moon. The sun itself is no more dangerous during an eclipse. The danger comes from people’s desire to look at it, to overcome the natural reflex that forces us to look away from the sun.

The safest way to view a solar eclipse is to project its image. The easiest way to do so is with a pinhole camera. The longer the projection distance from the pinhole to the viewing screen, the larger the sun will appear. Natural pinholes are often formed by gaps between tree leaves, covering the ground beneath with miniature eclipses. A small mirror on a window ledge can project a fine image on the ceiling or far wall, suitable for viewing by a whole room full of people.

You should never attempt to look directly at the sun without a proper solar filter, available from telescope stores, planetariums and science centers. This is especially true if you’re viewing it through binoculars or a telescope. There is no way to create your own safe filter from ordinary materials, so don’t risk it.

Editor’s Note: If you live in the populated visibility path and snap an amazing picture of the April 29 solar eclipse, you can send photos, comments, and your name and location to managing editor Tariq Malik at [email protected]

This article was provided to Space.com by Simulation Curriculum, the leader in space science curriculum solutions and the makers of Starry Night and SkySafari.