Entertainment News – The streets of Downtown Austin, TX, are flooded with badge-holders with shoulder-strapped briefcases. Telephone poles and sidewalks are covered with flyers for movies. Pedestrians shuffle from location to location with that overwhelmed look that indicates too much Texas BBQ and tacos. 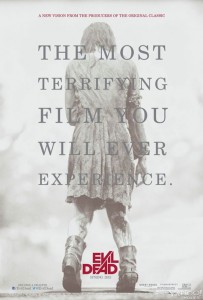 All of this can only mean one thing: It’s once again time for the annual SXSW Film Festival, Austin’s eight-day-long celebration of independent cinema from all parts of the world.

Evil Dead  is not a very good film but a good remake. The movie, a surprisingly faithful adaptation of Sam Raimi’s ‘80s horror film amps up the violence and gore for shocking results. The movie really pushes the boundaries of splatter horror in a way that audiences haven’t seen since perhaps Peter Jackson’s Dead Alive. Unfortunately, a cop out ending and excessive fan-service in the third act ultimately doom the film for critics.

When a group of young adults decide to spend the weekend in an isolated cabin – part of an intervention designed to help one of their own detox from their drug addictions – they unwittingly evoke the ancient, formless demons that live in the woods. One by one, the friends are possessed, mutilated and dispatched in increasingly violent ways until there is only one. As most know this is very faithful to the original’s story in the 80’s film.

What separates Evil Dead from the original film is a slickness to its production and, unfortunately, the lack of an overwhelmingly original style to the director’s approach. Where Sam Raimi deftly announced the appearance of a fresh and original film making voice with his debut feature-length film, Fede Alvarez’s film looks like it could be made by any of the anonymous music video directors that have been farmed out to the Platinum Dunes remakes that have angered so many horror fans in the last decade. Gone are the memorable creature designs, unsettling sound design or frenzied camera angles that made Raimi such a memorable director.

While any Evil Dead movie lacking Sam Raimi’s wild approach to the camera feels lacking, Alvarez’s movie comes admirably close to finding a voice of its own.

Evil Dead. The movie is very entertaining and there are sequences of raw nastiness that come close to great. The third act, as frustrating as it is, does not ultimately damn the movie. It could have been worse – Evil Dead the remake is legions better than any of the video games or comic books that Sam Raimi has felt good enough to slap the series’ name on in the last several decades.