Shug McGaughey, trainer of 2013 Kentucky Derby winner Orb, is a true believer.  In a quick meeting with journalists outside the winner’s barn at Churchill Downs on Sunday morning, McGaughey had only a few words to say: He’s going for the Triple Crown, and his horse, three-year-old Orb is ready to run the next two legs: the Preakness Stakes on May 18th and the Belmont Stakes on June 8th. 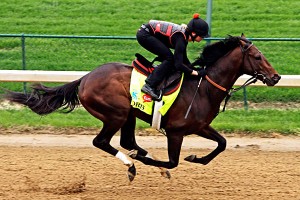 But first, McGaughey and Orb will have to wait a few more days. The field for the 2013 Preakness will be unveiled a few days before the event, but so far, only a small group of the 20 horses competing in the 2013 Derby have conformed their presence at the Preakness Stakes. Among them are Derby participants, Normandy Invasion and Vyjack, have been added to the list of possible candidates for the May 18 Preakness Stakes at Pimlico Race Course.  Other Derby starters confirmed for the Preakness are Goldencents, Itsmyluckyday, D. Wayne Lukas-trained duo of Oxbow and Will Take Charge.

For some horse racing experts, Orb has a good chance to become the first Triple Crown winner in over three decades.  I’ll Have Another won the first two legs of the Triple Crown by taking the Kentucky Derby and the Preakness Stakes, but just one day before the Belmont Stakes, the horse was scratched due to tendonitis.

Orb already travelled to New York, where he will stay for a few days. Then the horse will be moved to Baltimore where he and his trainer will complete his preparations heading to the Preakness. The Kentucky Derby winner will arrive at Pimlico Race Course next Tuesday, May 14th.

Odds for this race won’t be unveiled until next week; however, Orb is expected to be the big favorite for the Preakness, in which he will once again have the services of jockey Joel Rosario.

Putting the expectations aside, winning the Triple Crown is one of the toughest tasks for horses, trainers and jockeys. What makes the Triple Crown the ultimate challenge is the variability in length, speed and timing of the three courses. On top of that, horses face different competitors, weather conditions and other factors that could affect their performance.

Orb’s challenge to the Triple Crown waits for him at Pimlico Race Course in Maryland. If the horse enters first, he’ll be one step closer to accomplishing a feat that hasn’t been done in 35 years.  Would you bet on him? You Can Here.