This kid is could have any woman he wants when he turns 18. One of Yahoo’s newest employees is a 17-year-old high school student in Britain. As of Monday, he is one of its richest, too. 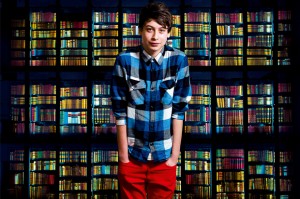 That student, Nick D’Aloisio, a programming whiz who wasn’t even born when Yahoo was founded in 1994, sold his news-reading app, Summly, to Yahoo on Monday for a sum said to be in the tens of millions of dollars. Yahoo said it would incorporate his algorithmic invention, which takes long-form stories and shortens them for readers using smartphones, in its own mobile apps, with Mr. D’Aloisio’s help.

“I’ve still got a year and a half left at my high school,” he said in a telephone interview on Monday, but, partly to abide by the company’s new and much-debated policy that prohibits working from home, he will make arrangements to test out of his classes and work from the Yahoo office in London.

Mr. D’Aloisio declined to comment on the price paid by Yahoo (the technology-oriented Web site All Things D pegged the purchase price at about $30 million), and he described himself not as the majority owner of Summly but as its largest shareholder.

Summly’s other investors, improbably enough, included Wendi Murdoch, Ashton Kutcher and Yoko Ono. The most important one was Li Ka-shing, the Hong Kong billionaire, whose investment fund supported Mr. D’Aloisio’s idea early on, before it was even called Summly.

“They took a gamble on me when I was a 15-year-old,” Mr. D’Aloisio said, by providing seed financing that let him hire employees and lease office space.

The fund read about Mr. D’Aloisio’s early-stage app on the Silicon Valley news site TechCrunch, found his e-mail address and startled him with a message expressing interest.

The others signed up later. “Because it was my first time around, people just wanted to help,” he said.

For teenagers who fancy themselves entrepreneurs – and their parents, too – the news of the sale conjured up some 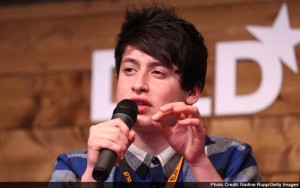 feelings of inadequacy, but also awe. For Brian Wong, the 21-year-old founder of Kiip, a mobile rewards company, the reaction was downright laughable: “I feel old!”

A few years ago, Mr. Wong was described in the news media as the youngest person ever to receive venture capital funding. But a couple of younger founders came along – “and then Nick broke all of our records,” Mr. Wong said on Monday.

Among the attributes that helped Mr. D’Aloisio, he said, was a preternatural ability to articulate exactly what he wanted Summly to be. “There were no umms, no uhhs, no hesitations, no insecurities,” Mr. Wong said.

Mr. D’Aloisio, for his part, sounded somewhat uninterested in answering questions about his age on Monday. He acknowledged that it was an advantage in some pitch meetings, and certainly in the news media, “but so was the strength of the idea.” He was more eager to talk about his new employer, Yahoo, which is trying to reinvent itself as a technology company (having dropped the digital media tagline it used before Marissa Mayer became chief executive last year).

“People are kind of underestimating how powerful it’s going to become and how much opportunity is there,” he said.

For a company that badly wants to be labeled innovative, those words are worth a lot.

Mr. D’Aloisio’s father, a commodities trader, and his mother, a lawyer, had no special knowledge of technology. But they nurtured their son’s fascination with it and he started coding at age 12. Eventually he decided to develop an app with what he calls an “automatic summarization algorithm,” one that “can take pre-existing long-form content and summarize it.” In other words, it tries to solve a problem that is often summed up with the abbreviation tl;dr: “too long, didn’t read.”

Yahoo said in a statement that while the Summly app would be shut down, “we will acquire the technology and you’ll see it come to life throughout Yahoo’s mobile experiences soon.”

Other news-reading and news-skimming apps made for mobile devices have attracted news media and technology company attention as of late. The social network LinkedIn was said to be pursuing an app called Pulse earlier this month. Still, the eight-figure payday for a teenage entrepreneur on Monday struck some as outlandish and set off speculation that Yahoo was willing to pay almost any price for “cool.”

Mr. D’Aloisio, though, will have a long time to prove his and his algorithm’s worth. As for the sizable paycheck from Yahoo, he said he did not have any specific plans for the sudden windfall. “It’s going to be put into a trust fund and my parents will help manage it,” he said.

He did say, however, that “angel investing could be really fun.” When not working at Yahoo, he will keep up with his hobbies – cricket in particular – and set his sights on attending college at Oxford. His intended major is philosophy.