Sports News – When is it too early to start recruiting for college football teams? In Texas football rules as seen as small Texas shut down on Friday nights for games, but is recruiting middle school students taking this too far? 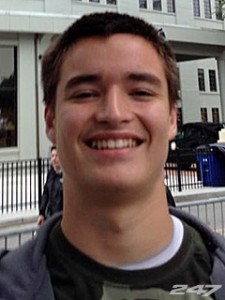 A 14-year-old quarterback from Texas has verbally committed to play football at Louisiana State University — and he hasn’t even graduated junior high yet.

“I like LSU because they’re an SEC team and they make a run for the championship every year,” Dinkelmann told ABC affiliate KVUE’s sister station KENS5.

Football is in his blood, literally. The 8th grader’s uncle is Ty Detmer, a former Heisman Trophy-winner.

Dinkelmann is already 6-foot-4 and weighs 210 pounds. He’s gone 15-0-1 in the past two seasons for his 7th and 8th grade teams at Somerset Junior High School.

Some may think this decision is premature. He still has four years to develop as a player, and possibly change his mind.

But Dinkelmann isn’t the only young player to commit to a team. In 2010, quarterback prospect David Sills committed to USC when he was just 13 and 5-foot-8 cornerback Jairus Brents was offered a scholarship last year to Kentucky when he was in seventh grade.

“If they have the same coaching and the same playing style by the time I graduate, then it would be a dream of mine 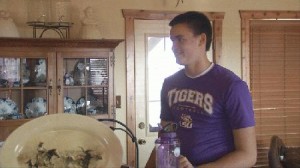 to go there,” Dinkelmann said. “But if they change coaches and have a bad season or two, then it might be one of those things where I look at a different college.”

The child prodigy has a while to make up his mind. Dinkelmann can’t sign his national letter of intent until Feb. 7, 2018.

Next season Dinkelmann will play for the Somerset High Bulldogs under the leadership of his grandfather and head coach, Sonny Detmer. Dinkelmann’s uncle, former NFL quarterback Koy Detmer, will be his quarterback coach. Detmer’s son, Koy Jr., also plays quarterback.

Next year will be Koy Jr.’s senior season, which means Dinkelmann will most likely quarterback the freshman team. It also means he won’t be getting much varsity experience.

Dinkelmann’s father, Johan, also a football player, said his son started catching the eye of LSU a few years ago at football camps.

“A couple of these camps, you turn in film and stuff like that, and I guess it made its way into [LSU coach] Cam’s [Cameron’s] hands,” he said.

The 8th grader was then invited to the Tiger’s home game against Texas A&M last fall.

“LSU is my favorite school. Why wouldn’t I want to commit there?” he said. “It’s a great college, great football team. One of my dreams is to go play for them.”

By Kayle Fields, from abcnews.go.com, edited by Dan Stevens