Costa Rica Sports – It’s been a busy offseason for New York City FC, highlighted by almost a complete overhaul of their backline ahead of their second season in Major League Soccer. 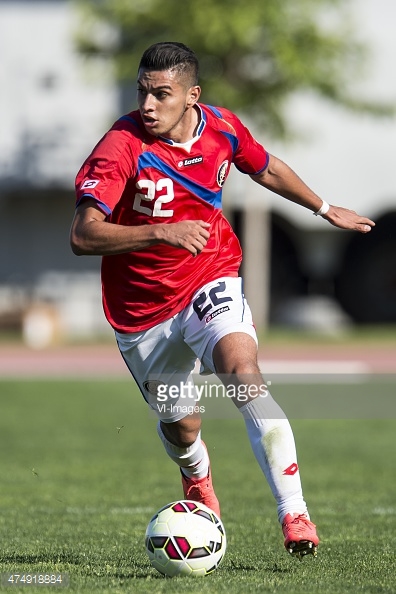 A big part of that reconstruction is Ronald Matarrita, the Costa Rican international who is expected to be the club’s starting left back. The 21-year-old, whose nickname is simply “Mata,” comes to New York from Alajuelense, where he made 67 appearances from 2012-16.

Who is Matarrita? What should NYCFC fans expect? What does he think about Major League Soccer? MLSsoccer.com caught up with him to learn a little bit more.

A little help from his friends

Like many players who make a big move out of their comfort zone, Matarrita spoke to a few of his Ticos teammates about what to expect out of MLS.

“What a few teammates told me, like Johan Venegas [Montreal Impact] and Kendall Watson [Vancouver Whitecaps], MLS is improving. By my own recognition, I have seen plenty of matches and I have always liked MLS matches. This I am taking patiently.”

Matarrita is excited about the growth of MLS, but why did he want to play for NYCFC?

“First off, it is the quality of the team,” he said. “Knowing the team and its players, Patrick [Vieira] as the head coach, [David] Villa, [Andrea] Pirlo and [Frank] Lampard, it’s an incredible motivation to keep improving.”

Excited to play for Vieira

Matarrita knows about Vieira’s vast playing experience and is thrilled to be able to learn from such a legendary figure.

“To have him as a coach is incredible,” Matarrita said. “With him, I can learn so many things that as of this moment I do not know. I hope to learn a lot rom him and to earn his confidence. To earn a spot in the starting XI, it would be an honor.”

While Matarrita is new to MLS, he’s not new to facing MLS teams. As a player for Alajuelense, he took on D.C. United and the Montreal Impact in the 2015 CONCACAF Champions League. The Impact beat Matarrita’s squad in the semifinals.

“Those matches against Montreal and D.C., I found myself against very competitive teams,” Matarrita said. “This year, it will be hard, but nice to continue competing and earn a championship.”

Matarrita scored four goals at Alajuelense, but what makes him most proud is the fact that he’s never received a red card in his professional career.

Proud to be a Tico

The highlight of Matarrita’s career to this point was being called up to the Costa Rican national team. He has appeared for Costa Rica on the U-17, U-20 and U-23 squads and has six caps with the full national team, starting twice during World Cup Qualifiers against Haiti and Panama.

“It was the greatest feeling I have ever had,” Matarrita said. “It is the most satisfying moment of my life. When I saw the list and heard my name … it is a happiness that defies description.”

Matarrita’s first appearance with the Ticos came against Brazil in a friendly at Red Bull Arena on Sept. 5. He was in the starting XI and nearly teared up when matched started.

“That has been my dream since I was a child,” he said. “From the moment the referee blew the whistle against Brazil, I wanted to cry. I thought of my mother, my grandmother, everyone who helped me along the way. I thank God for that opportunity.”

Ready for the Big Apple

Red Bull Arena was the closest Matarrita has ever been to New York City. He hopes the atmosphere there for Costa Rica’s friendlies is just a preview of what it will be like at Yankee Stadium.

“The atmosphere in those matches I liked, and I said if this is what it’s like when it’s not the domestic national team, imagine what it would be like playing at Yankee Stadium?” he said. “I can’t wait to step on the field and show what I’ve got.”

An immediate hit in preseason

While he has yet to experience New York City, Matarrita has spent most of his time in Florida with his new NYCFC teammates and he’s made an immediate impact. Following the club’s first exhibition against Florida Gulf Coast University, Vieira said Matarrita played a “perfect game.”

“To be around players of that level will help me a lot to better my skills, both mentally and footballing,” Matarrita said. “They are super charismatic. They grab you. They have integrated me into the group and my goal has been to integrate as fast as possible. Here, I have been given a hand in that and I am super happy to be a part of that.”

What should NYCFC fans expect?

As he fully integrates with his new teammates, Matarrita is excited to make his regular season debut on March 6 against the Chicago Fire and a week later at Yankee Stadium against the New England Revolution.

“The only thing they can expect is that I will give 100 percent,” he said. “Mentally, I am accustomed to playing my best, playing like it is my last. I hear the team’s support is one of the largest in the league, so I am anxious to see them singing in the stadium.”

Real-Life X-Files Unit is Shut Down