A Run-In With the Zombie Fraulein‏ (Video)

Ghosts & the Supernatural – I met a former zombie in 1974 in Bremerhaven, Germany. 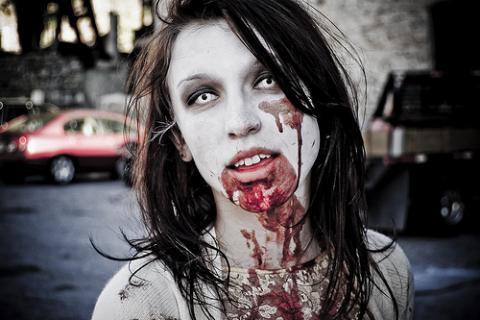 When I was working undercover narcotics with CID (Criminal Investigation Division) – DST (Drug Suppression Team), I was dating a lovely blonde Fraulein in Germany by the name of Gabriela. I met Gabriela at a discotheque in which I was staking out. I learned that Gabriela was once a former zombie.

You might find this to be an odd story, or a story that is unbelievable. But, what I will tell you is the truth. Gabriela and I dated for some time, when we became intimate, I noticed a large circular hole on the right side of her buttocks. It was as if someone took a spoon and dug out a hunk of her flesh. I asked her how this hole was created. Her story was horrifying. This is where I learned she was a former zombie….a former sexual servant zombie.

She told me that she was vacationing with her girlfriend in Munich and they befriended two Middle Eastern boys. They decided to go out dancing with these boys. It was a fun night of disco music, throbbing lights and drinking. At some point of time, they both blacked out and when they both awoke, they were in a strange bedroom with strange men looking at them.

Since this story was told to me many years ago, details of certain events that Gabriela relates to me escapes me. What I will let you know is that during their stay at this strange place, they discovered they were in the Middle East. Every day and every night they were given hallucinogenics. Strange men were having sexual liaisons with both of them and there was nothing they can do to stop it. At some point of time, Gabriela tried to escape and that is when a chunk of her flesh was cut out.

During this one incident, is the only time she felt like she was somewhat in control of her mind. Otherwise, during her full stay there, she had no will of her own. She felt like her mind was under the constant control of her captives. She gave herself willingly to the strange men that visited her bedside. She tells me that she was a zombie.

From what she tells me, I would say she would fall into the category of being in a ‘zombie state’. It would appear that her captives controlled her mind and her body. She was truly a zombie slave. She was given drugs to make her a willing participant during her enslavement. Gabriela tells me that it was her father, a former Nazi that was able to hire a small mercenary team to rescue her and bring her back home safely. Would you consider Gabriela a true zombie? If you want my opinion, I would have to say ‘yes’.

Before I close this story, we recently did a Scouting Mission to Arnold. We used what is called a Spirit Box. We got some amazing results. Some of the investigators heard their names called via the Spirit Box.

The Growth of Tourism in Costa Rica in 2014

Costa Rica Has Ruled That The GMO Approval Process is Unconstitutional